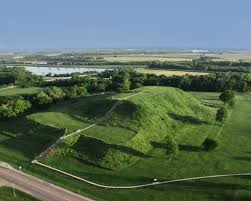 Cahokia mound in Illinois, where a Mississippian city was

When did the Mississippian period start?

After 800 AD the Mississippian culture developed all along the Mississippi and the Missouri valleys, replacing the earlier Woodland culture. Now many people lived in towns. They built temples and palaces on top of big earth mounds. They had wooden fortification walls around their towns, with walkways at the top.

How did Mississippian people live?

But the Mississippian people also grew corn. They lived mainly on corn, beans, and squash – and fish from the rivers. They built bigger mounds than the Hopewell people, too, and like the Maya in Central America they built buildings on top of their mounds – temples to their gods, and palaces for people to live in, and meeting houses.

History of corn
Where do beans come from?
What about squash?

Check out our video on where Native Americans lived over time

The Cherokee in the Mississippian period

Further east, Cherokee people also started to live in towns and villages and farm a lot of their food. They traded up and down the rivers. In the north, at the headwaters of the Mississippi basin, the Cree and the Sioux continued to gather wild rice, though they too built burial mounds.

More about the Cherokee
And the Cree
And the Sioux (Lakota)

The Medieval Warming Period which began around 1000 AD and lasted until 1300 AD may have caused a lot of people to look for a better place to live during this time. The Inuit moved south from the Arctic circle into Labrador. The Vikings left Greenland entirely and moved back to Iceland and Scandinavia.

The Inuit in the Middle Ages
The Vikings in Greenland
What about the Iroquois?
And the Pueblo (Anasazi) people

The Iroquois moved north along the Susquehanna river (from modern Maryland to modern New York State and Canada). The Pueblo people in the south-west left their towns in northern Arizona and Colorado about 1200-1300 AD and moved south.

People who weren’t farming so much

Not everyone in North America lived in towns and farmed at this time. Corn and beans, which were developed much further south in Mexico, didn’t grow well in the north. So some people who lived in the north, like the Iroquois, kept on living in a Late Woodland culture until they met Europeans in the 1500s.

People in the Great Plains

And the people who moved to the Great Plains, like the Navajo, the Blackfoot, and the Ute, mostly didn’t start farming, because the grasslands would not support the kind of farming they knew how to do. Instead, they got most of their food from bison hunting.

Bison on the Plains
Who were the Blackfoot?
And the Ute?
The Paiute
And the Shoshone

They traveled from one place to another as nomads following the bison, carrying their things and using dogs to pull a travois with their tipi on it.

After the warming period, about 1350 AD, there was a global cooling period known as the Little Ice Age. Other people moved around during this time. For instance, the Navajo and the Apache moved south out of Canada into the southern Great Plains at this time.

Who were the Apache?

The Mississippian and Cherokee people didn’t move anywhere. But around 1400 AD, something does seem to have changed in the Mississippi Valley. People stopped building mounds, and a lot of the bigger towns seem half-abandoned. People seem to have moved out to the countryside, maybe doing more hunting and gathering and less farming.

When did smallpox and measles reach the Americas?

This might be because of the warming period, or it might be a political collapse, or both. Possibly Basque fishermen in search of cod brought diseases like smallpox and measles, or even plague, from Spain to North America about this time. In any case, at the time that the first official Spanish explorers arrived in North America, around 1500 AD, people were not very well prepared to fight them off.

What is smallpox?
What is measles?
The bubonic plague

American history after the European invasion