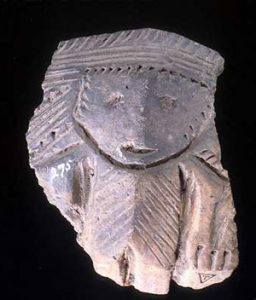 Early Iroquois history starts when the Iroquois originally came to America with the other Native Americans. They may have first settled around what’s now Maryland around 1000 AD.

Iroquois since colonization
What was Iroquois food like?
Iroquois longhouses
All our Native American articles

Global warm weather between 1000 and 1300 AD may have encouraged the Iroquois (EAR-oh-koi)  to move northward. They moved up the Susquehanna river into what’s now Pennsylvania and New York. When the Iroquois moved north, they ran into a smaller group of Woodland nomadic people and took their land.

In the 1200s AD, for instance, the Allegans controlled a trade town where two important trails crossed at the north end of Owasco Lake. It’s now the town of Auburn. Cayugas (a kind of Iroquois) drove the Allegans away and took it over.

The Iroquois probably brought farming with them when they arrived in this area. Iroquois farmers grew corn and beans and squash– the Three Sisters – and also sunflowers and tobacco. The Iroquois traded in canoes north up the Hudson River to the St. Lawrence. They bought copper that came from Lake Superior. In return, they sold rare seashells, dried fish, and tobacco.

Where does corn come from?
More about the Three Sisters
Why did they grow sunflowers?
History of tobacco
Native American economy

Around 1350 AD, the warm weather ended, and the environment began a “Little Ice Age“, with colder weather. The Iroquois started to fight a lot of wars around this time. They built their villages on high ground and surrounded them with strong log walls. One of their main enemies was the Algonquin, who were trying to move further south where the weather would be warmer.

The Little Ice Age
Who were the Algonquin?

At some point around the 1400s AD, the Iroquois formed a confederacy (con-FED-ur-ah-see), which is a sort of club or organization. This was an agreement between the different groups of Iroquois – the Mohawk, the Oneida, the Cayuga, the Seneca, and the Onandaigua – to get along and fight as allies against their enemies, instead of fighting each other. Iroquois leaders recorded their agreement with wampum.

Wampum was a kind of decoration made by fastening thousands of tiny seashell beads together. It was super hard to make wampum. So Iroquois people used wampum to mark very important occasions like marriages, or treaties. But wampum was also a kind of money, because it was rare and hard to get, like gold.

Learn by doing: making a wampum belt
More about the Iroquois

The Iroquois: The Six Nations Confederacy, by Mary Englar (2006).

If You Lived With The Iroquois, by Ellen Levine (1999). Written – very lively and with a lot of good detail about daily life. I really liked it.