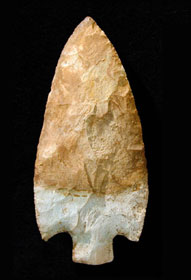 Algonquin history: Algonquin arrowhead from about 1 AD. It’s made from stone imported from south of the Great Lakes

From Athabascan to Algonquin

Algonquin tradition says that people who called themselves Algonquins first lived along the Atlantic Coast, in the north-eastern part of North America, north of the Iroquois and south of the Inuit (in modern Canada).

Probably sometime before 1000 AD the Algonquin came from Athabascan land further west (and thousands of years before that, the Athabascans came over a land bridge from Siberia in Asia).

What’s this land bridge?
Who were the Athabascans?

The Algonquin  language is related to the languages of other Athabascan people like the Cree and the Blackfoot, the Navajo and the Apache. By the 1400s AD, the Algonquins had moved back a little to the west, along the St. Lawrence river.

Who were the Cree?
Where did the Blackfoot live?

Algonquin people mainly hunted and gathered their food, traveling in small nomadic bands. In the short northern summer, they met in larger groups for fishing and religious ceremonies, like their relatives the Blackfoot further west. When fall came, they split up again into small bands and left for their own hunting territory, which was passed on from father to son.

Trading with the Iroquois and the Cree

The Algonquins lived too far north for farming, (it was too cold and dark), so they got corn and beans by trading with (and raiding) the Iroquois to their south. Algonquin traders used their canoes to travel long distances on the St. Lawrence River to trade with people as far away as the Cree on the Great Lakes.

History of corn
Where did beans come from?

Did you find out what you wanted to know about Algonquin history? Still have questions? Read about what happened to the Algonquin when Europeans arrived in North America in the 1500s, or ask your question in the comments below!

Learn by doing: rent a canoe and paddle around
More about the Algonquin