As places got more crowded, in the Neolithic or New Stone Age period, some people began to live in larger groups. These villages were still not very big: maybe ten or fifteen families, maybe a total of less than a hundred people. But still that was enough people to make it hard to make decisions.

More about the Neolithic
History of government

In some places, what happened was that one man or woman got to be able to tell the others what to do, and they would do it, most of the time. Often this was because the “big man” was stronger or bigger than everyone else and could beat them up. Or she might have friends who would beat everyone else up.

History of hunting
And of friendship

Sometimes everyone just thought this was the smartest person around. Sometimes they just were good at making friends and convincing people of things. Or they might be better at hunting than other people. Somehow this man or woman would get everyone else in the village to do what he or she said, most of the time. 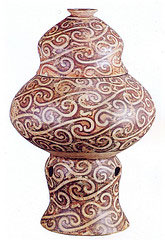 What decisions were people making?

They needed a war leader in case people attacked, or in case they attacked other people. Probably the most important thing was to decide who got the water, and what they did with it. Water has always been scarce around the Mediterranean and in West Asia. People fight over whose garden will be watered. A big man or woman can decide that kind of fight without anyone getting hurt.

Not all the people who had “big men” were settled down in villages, though. Nomads also sometimes had “big men,” if their group was big enough to need one. Nomadic big men decided where the group should travel to, and when. They also acted as war leaders and arranged trade agreements with settled people and with other nomads, and agreements on the use of watering holes.

Learn by doing: Play a game and take turns being the leader who organizes things.
More about chiefdoms