What are nomads? Definition and examples 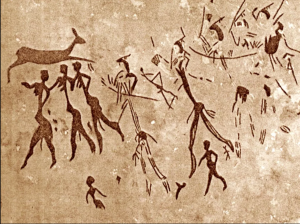 Nomads are people who travel around from place to place without having one settled place where they live. Many are hunters and gatherers like the San. Often they are shepherds, goatherds, or cattle herders. Sometimes nomads do stay in one place all winter, and only travel in the summer, or the other way around.

But the needs of the sheep or cows force them to go where they can find grass for the sheep or cows to eat.
Most nomads trade with settled people in cities, selling their goat meat, their donkeys, and their horses, as well as cheese, to the city people in exchange for grain (wheat or barley), beans, olive oil, wine, and manufactured things like jewelry or knives. 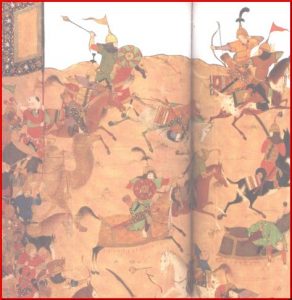 People living in cities used to think nomads were stupid and lazy, because they didn’t live in houses or work regular jobs or go to school. Sometimes city people thought that nomads were thieves, because many times thieves would also go out from the cities and live alone in the country, hiding out to keep from being killed. The West Asian religion of Zoroastrianism is very harsh toward nomads.

On the other side, many nomads, like the Jews, didn’t think much of the city people either. Nomads tended to think that city people were wimpy, and also that they were bad, because they had things like fancy dresses and perfume that the nomads mostly didn’t have, and they drank more wine and beer.

Some examples of groups of people who have lived as nomads are the Jews, the Arabs, the Mongols, the San, the Sioux Indians, and the Berbers.

Learn by doing: pick some wild berries or catch some fish
More about Native American nomads

Bibliography and further reading about nomads: