What is barley? History of food 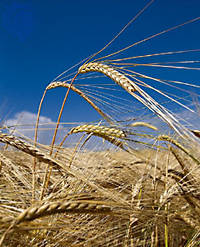 Barley ready to be harvested

How is barley different from wheat?

Barley’s a kind of grass, like wheat or millet or sorghum or rice, that is a good source of carbohydrates for people. Barley and wheat both grew wild in West Asia. Barley is different from wheat mainly in that it will grow with less rain, so you can grow it more different places. Also, barley doesn’t taste as good as wheat. So poor people usually ate more barley, and rich people ate more wheat.

More about wheat
How about millet?
West Asian food history
All our West Asia articles

When did people start farming barley?

In the grasslands where people liked to live, barley grew wild. People gathered it when it came ripe every spring. They ate barley boiled, like oatmeal, or in soup, or they ground it into flour and made bread. People first began to farm barley (instead of picking it wild) around 11,000 BC in West Asia, possibly because of a climate change that made the world hotter and drier. 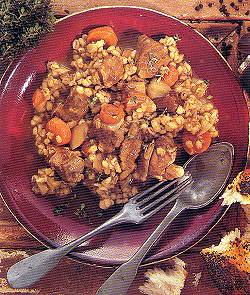 How did people eat barley?

Early farmers ate barley like wheat as a boiled porridge, or in soup, and they also made barley bread. But barley is also the grain that people usually used to make beer. People didn’t make noodles out of barley.

History of beer
How to make barley soup

What did they use the straw for?

Because you only ate the seeds from the barley, you had all the rest of the plant left over. The stalks dried into straw. You could weave the straw into mats to sleep on, or give it to animals to sleep on, or make shoes or baskets out of it, or tie it into bunches to thatch your house. The leftover straw was nearly as useful as the seeds.

More about straw
Ancient Egyptian shoes
History of baskets
What is thatching?

Barley spreads around the world

Farming barley spread south from West Asia to Egypt and North Africa around 8500 BC and to Sudan by about 5000 BC.

Barley also spread to Greece and Italy about 7000 BC, and reached northern Europe about 5000 BC, travelling along the Danube and Volga rivers. In Ireland and Scotland, though, oats and oatmeal were more common than barley. By about 6000 BC, barley reached India, and it got to China about 3000 BC. (People didn’t eat much barley in China, where they ate millet or rice instead, but they used barley to make beer.)

By about 1000 BC, people were farming barley in Korea, and by 500 AD Tibetan people were also eating a lot of barley. Barley reached Ethiopia about 500 BC, and West Africa in the Middle Ages. The Dutch brought barley to South Africa in the late 1650s.

From barley to rye and potatoes

Under Roman and Parthian rule, ordinary people lived mainly on barley bread and barley porridge and soup, while rich people ate wheat. But by the Middle Ages, poor people in Northern Europe and Eastern Europe switched to rye bread (not very happily).

More about rye bread
And about potatoes

Their bigger contribution was to bring potatoes in the other direction, from South America to Europe. Gradually poor people in Europe switched from barley to potatoes as their main food. Today Europeans and Americans mainly use barley for beer, but in North Africa and Tibet, barley porridge and barley bread are still ordinary food.

Learn by doing – barley soup
What about wheat?