What is straw? History of straw 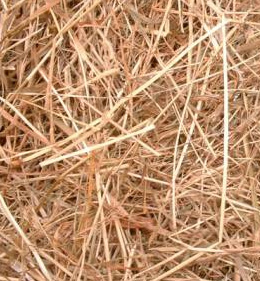 History of Straw: loose straw in a pile

Straw is the dried stalks of tall grasses like wheat, millet or barley. After people harvested the seeds of these grasses for food, they used the straw for everything from shoes to mattresses to baskets.

More about wheat
Where does millet come from?
History of barley

When did people start to use straw?

People have been making straw into baskets, hats and other things since at least 10,000 BC. That’s when people started to farm wheat and barley. But people may have been using straw much longer than that, because they could also have picked wild wheat and barley and other grasses. They may have been making straw baskets and hats since the Paleolithic, when people first started to make stone tools.

More about stone tools
What was going on in 10,000 BC?
What’s the Paleolithic?

What did people do with straw?

People used straw to make useful things all over the world, from Northern Europe to China and all over North America and South America too. Straw was cheap and there was plenty of it, and anyone could make things out of it without any special tools.

Straw shoes from Egypt
The history of baskets 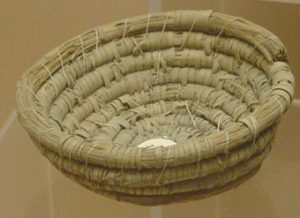 Sitting and sleeping on straw

You could just use the straw loose in heaps for animals or people to sleep on. Straw was softer than the ground to sleep on, and warmer. Also, when the straw got dirty you could rake it out of the house or barn and replace it with fresh straw. Schoolchildren also sat on straw bales, or just heaps of straw, on the ground.

If you braided stalks of straw together into cords, you could use them to weave baskets or shoes or hats, or mats to walk on or sleep on. People used bunches of straw, or straw pads, to scrub their floors, or to clean pots and pans.

A Korean weaver making a basket from straw

What is thatching?
How do you make plaster?
Mudbrick or adobe?

How about drinking straws?

The first drinking straws were really made of straw. Stalks of straw are hollow, and you can totally use them as drinking straws. People used these early straws to drink beer (and maybe other things). Real straw is a much more sustainable kind of straw than the plastic ones people use today – we should go back to real straw!

Learn by doing: find a straw hat and check out what the straw is like.

Bibliography and further reading about the history of straw:

Do you need a second source about straw? Check out this article from the Encyclopedia Britannica!