Why do people plaster walls? History of Architecture 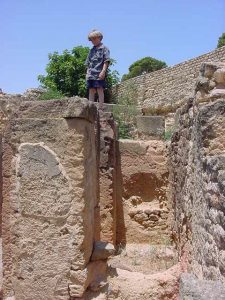 People used plaster to cover the bare stone or mudbrick on the walls of houses, both inside and outside (on the outside it is called stucco). The plaster makes the wall more waterproof, so it won’t fall apart in the rain. Plaster also makes the wall smooth and white, or you can paint it any color. People used plaster all over, from Africa to China.

You make plaster by burning chunks of limestone, marble, or travertine in a lime kiln, a sort of oven. This gives you lime, and then you mix the lime with water to make plaster. You paint it on the wall, and when it dries it will get hard.

You can paint on this plaster to decorate it: this kind of painting is called fresco painting. 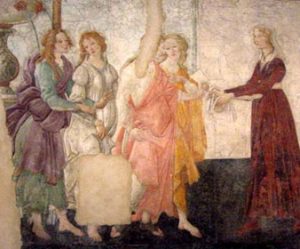 In order to get lime for plaster, and also to make mortar, lime-burners in the Middle Ages in Europe and West Asia burned many of the great buildings that the Greeks and Romans had built, and many of the marble statues that Greek and Roman artists had carved. That’s the main reason why we have so few of those marble statues today.

People thought burning marble statues was a good thing, because the stone came from temples dedicated to the Greek and Roman gods, and the statues were of Greek and Roman gods. Now that most people were Christians or Muslims, they didn’t like having all these old gods around, and also many people (both Muslim and Christian) in West Asia thought that any images of people were against what God wanted.