Neptune discovered – on this day

Astronomers have known about six of the planets for at least five thousand years, since the time of the Sumerians. Even the names of the planets we use today are just translations of those old Sumerian names. But they didn’t know about the planet Neptune.

Mesopotamian astronomy
What are planets?
History of astronomy

The one nearest to the Sun was Nabu (Greek Hermes, and our Mercury). Next came Ishtar (Greek Aphrodite, and our Venus). Further out was Nergal (Greek Ares, and our Mars). After that was Marduk (Greek Zeus, and our Jupiter), and then Ninurta (Greek Kronus, our Saturn). 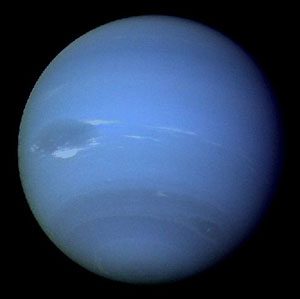 But early astronomers didn’t know about Neptune, because Neptune is too far away to see with just your eyes. To see Neptune, astronomers had to wait for someone to invent glass lenses, and then telescopes. First someone in the Eastern Mediterranean (maybe in Egypt) invented glass, about 1500 BC.

More than a thousand years later, they figured out how to blow glass into bubbles. A thousand years after that, Islamic glassmakers – still in the eastern Mediterranean – learned to make glass lenses. But the first telescopes were built in Europe, about 1600 AD. Galileo used one in 1610 to see the moons of Jupiter.

Neptune
Uranus
What is gravity?

But the first astronomer to see the planet Neptune was not until much later. On September 23rd, 1846, European astronomers saw it for the first time. Even then, they only found it because mathematicians had calculated that it had to be there, based on the gravity and movement of its neighbor planet Uranus. So it took five thousand years of observations, and inventions made by people in Africa, Asia, and Europe, to finally discover the planet Neptune.