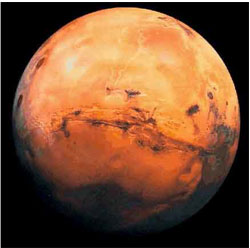 Mars, the way the planet looks from space

Which planet is Mars?

The closest planet to Earth is Mars, and Mars is also the planet that seems most likely to have life on it besides our own Earth. It’s the next planet further away from the Sun after Earth.

Why is Mars red?

When you look at Mars from Earth, it looks reddish, and even close up Mars is also red. That’s because there’s a lot of iron on the surface, and it has turned red in an oxidation reaction – that is, Mars is very rusty.

More about iron
And oxidation reactions
A project with rust

When did Mars form?

The planet Mars formed about 4.5 billion years ago (4,500,000,000 years ago), about the same time as our Sun and the Earth and the other planets that go around the Sun.

What is the sun made of?
How old is the Earth?

Mars is a lot like Earth in some ways. Mars is not too far from the Sun to be solid (as Jupiter is), and it’s not so close to the Sun that it is very hot (like Mercury). Like Earth, Mars rotates so that it has regular short days and nights, seasons, and a year more or less the same length as our year. But Mars is only about half as big as Earth – about 1000 miles (1500 kilometers) across, so Mars has less gravity than Earth does. 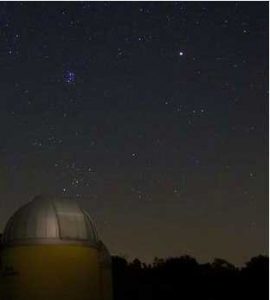 Does Mars have an atmosphere?

The atmosphere – the air – on Mars is thinner than on Earth, because there is less gravity. The air is mostly carbon dioxide and hardly any oxygen. This probably means that there are no plants on Mars that can photosynthesize using sunlight.

Earth’s atmosphere
What is carbon dioxide?
What is sunlight made of?

Is there water on Mars?

Probably there is no liquid water on Mars now, because the temperature is usually below freezing there, and the air is too thin. The air pressure is so low that water would just evaporate. There is ice made out of water though.

Ear popping and air pressure project
What is ice?