What is a photon? Physics of light 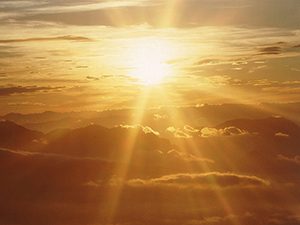 Photons – Sunshine breaking through the clouds.

When did the first photons appear?

A photon is a tiny little particle of light, far too small to see individually. All light is made of photons (FOE-tahns). The earliest photons probably appeared about fifteen billion years ago, during the Big Bang.

What’s the Big Bang?
What are photons?
More about light
All our physics articles

What’s the speed of light?

What are electrons?
And quarks?

The photon: behind light, radio, TV, sunburns, microwaves and X-rays

Photons behave in some ways like particles, little bits of stuff, and in other ways like waves. It’s not just visible sunlight that is made of photons, but a lot of other kinds of waves like radio waves, television broadcasts, x-rays, and the ultraviolet (UVA and UVB) rays that give you sunburns.

The difference between light and these other kinds of waves depends on the size of the wave – the wavelength. Very short waves are x-rays and ultraviolet rays, that cause sunburn. Visible light like sunlight is made of medium-length waves. Radio and television waves are very long waves. But all of these rays are made of photons.

Showing that photons are particles

If a photon moves in short wavelengths, like x-rays or ultraviolet rays, then that photon has more energy. It’s like if you were jumping rope quickly, you’d be using more energy than someone who jumped slowly. That’s why you have to be careful how much x-ray radiation or UV rays you get, or you’ll get radiation sickness or a sunburn.

If the wavelength is longer, then that photon will have less energy – that’s why it’s not dangerous to stand in the way of microwaves, or cell phones, or radio or television broadcasts.

When photons bump into other atoms, some of their energy can get the electrons in those atoms moving faster than they were before – that’s what we call heat.

What is heat?
What is friction?
A friction project

That’s why you get hot sitting in the sun. (Microwaves work differently: they are long waves that hit water molecules just right to make them flip around, and it’s the friction from the water molecules flipping that heats your food.)

Did you find out what you wanted to know about photons? Let us know in the comments!

Learn by Doing – Setting up a Solar Oven