What are atoms? Simple science – Chemistry 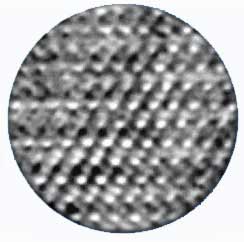 Lithium, cobalt, and oxygen atoms (as in a lithium-ion battery), seen under an electron microscope from Berkeley Labs

What is an atom?

Atoms are collections of tiny bits of matter, particles which we call protons, neutrons, and electrons.

More about electrons
All our physics articles

What are those made of?

These particles are made of even smaller particles called quarks.

But even protons, neutrons, and electrons are so small you can’t see them even with a microscope, You need a special electron microscope.

If you made a tiny dot with the tip of a sharp pencil, and if the pencil lead was all carbon atoms, that little dot would have about four billion billion carbon atoms in it. Atoms are really small!

What makes atoms different from each other?

Some atoms have more protons, neutrons, and electrons, and some have fewer. Depending on how many protons and electrons an atom has, the atom behaves differently. The simplest atoms have just one proton and one electron – that’s a hydrogen atom.

More about hydrogen
And our chemistry articles

A bunch of these atoms together make hydrogen gas. More complicated atoms have more protons, more neutrons, and more electrons. A bunch of them together make the other elements – helium, oxygen, copper, iron, gold, mercury, lead, and so on.

The more protons, neutrons, and electrons an atom has, the more mass it has, and the heavier it will be in Earth’s gravity. Hydrogen and helium are very light, and people use them to inflate balloons.

What is mass?
And what is gravity?

Which atoms are the heaviest?

Gold, which has 79 protons, is very heavy, and lead, which has 82 protons, is even heavier, so people use lead to make weights that are heavy without being too big around. The heaviest atom that occurs naturally is uranium.

What holds atoms together?

Because protons have a positive electrical charge, the protons tend to push away from each other. This would make atoms fall apart, except that another force, the strong nuclear force, pulls them back together. It’s this balance of forces that makes atoms possible, and since everything is made out of atoms, that’s what makes everything possible.

More about the strong nuclear force
More about electricity
What is a molecule?

But most things are not made out of just one kind of atom. Instead, different kinds of atoms get together to form larger clumps of atoms called molecules.

Bibliography and further reading about atoms: