What is iron? Atoms, elements, chemistry 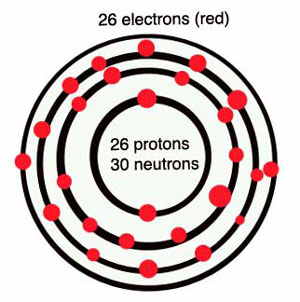 Diagram of an iron atom

When the supernova explodes, it shoots out carbon, oxygen, and iron atoms all over the universe. Eventually gravity sucks these atoms into new planets like Earth. All of the iron on Earth was originally inside stars. 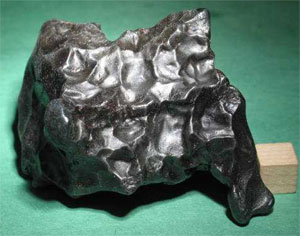 Unlike other atoms, iron can become magnetic. This happens because iron atoms have more of a tendency to line up all facing the same way than other atoms do. (More about magnetism here.)

The Earth’s core is probably mostly made of iron, while Earth’s crust (the top layer that we live on) is about ten percent iron.

All living things – both plants and animals– also contain iron. Plants use iron to help them pull energy from sunlight through their leaves, and animals (including people) use iron to move oxygen through their bodies and bring energy to their cells. Because iron has only two electrons in its outermost ring, those two lonely electrons join up easily with oxygen atoms.

Iron looks black to us when it is on its own, and it looks red to us when it joins up with oxygen. That’s why blood looks red (it has iron and oxygen in it), and it’s also why rusty iron looks red (the rust is iron that has combined with oxygen from the air or water). And that’s the way Greek black-figure and red-figure vase painting works.

Bibliography and further reading about the chemistry of iron: