What is light made of? Why is the sky blue? 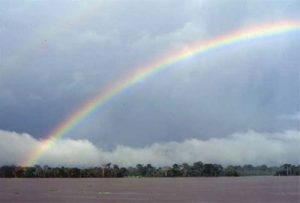 Rainbow over Amazon river – What is light made of?

What is light made of?

Light is made of billions of tiny particles called photons. These photons travel from one place to another in waves. Visible light is the subset of photons that move at a wavelength that we can see.

What is a photon?
Rainbows project
Sine waves
All our physics articles

Why is light different colors?

Where does light come from?

Most of the light on Earth comes to us from the Sun. The Sun shoots out billions of photons every second in all directions, and the ones that happen to be pointed toward the Earth come here. When these photons get to the Earth, they first run into Earth’s atmosphere. Earth’s atmosphere absorbs some of these photons, especially the ultraviolet ones whose wavelength is shorter. This is a good thing for us, because too much ultraviolet light would kill us, and all other living things on the planet. (In fact, doctors sometimes use ultraviolet light to kill germs!)

What is the sun made of?
More about stars
Different types of stars
What is the atmosphere? 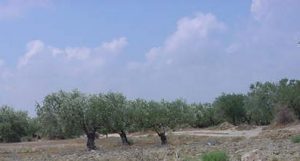 Why is the sky blue?

Because blue light has the shortest wavelength of the visible light photons, the atmosphere also absorbs more of the blue light than of the other colors. That’s why the sky looks blue from the ground in the daytime, because you can see all that blue light up there. But when the light hits clouds instead, the clouds reflect all of the light down to Earth, so the clouds look white to us.

What are clouds made of?
Why are there seasons?

Most of the visible light does get through the atmosphere and comes down to the surface of the Earth. In the winter, there is a little less light than in the summer.

In addition, a lot of infrared light also gets through the atmosphere. This is light that has a longer wavelength, so we can’t see it.

Who figured all of this out?

By about 350 BC, the Chinese scientist Mozi invented the camera obscura, which helped him and other scientists to learn that light could be bent in different directions. A couple of generations later, the Greek philosopher Aristotle suggested that light bounced off objects to enter your eyes. Soon afterwards, Herophilus, in Egypt, cut apart eyes and figured out how they worked.

In medieval Egypt, Ibn al-Haytham wrote that color was somehow related to these light rays entering your eyes. The medieval Islamic invention of curved glass lenses helped people do experiments on light. Farisi figured out that refraction caused rainbows. By the 1600s, Emilie du Chatelet, in France, suggested that heat and light were related: that different colors of light carried different amounts of heat.