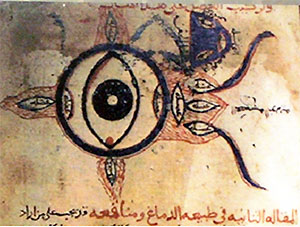 Who was ibn al-Haytham?

Ibn al-Haytham was born about 965 AD in Basra, near the Persian Gulf (modern Iraq), and when he grew up he went to Cairo, in Egypt, to get an education. Cairo was at that time a rich university center under Fatimid rule. He became a respected scientist in Africa.

What did ibn al-Haytham work on?

He first worked on a plan to build a dam across the Nile river. But then he realized that building his dam was too hard for medieval engineering skills. He began instead to do experiments with people’s eyes. He was trying to figure out how vision worked. Why could people use their eyes to see things?

Evolution of eyes
The camera obscura

Light comes into your eyes, not out of them

Based on his experiments and on Herophilus‘ description of the structure of eyes (as reported by Galen), ibn al-Haytham supported Aristotle and Ptolemy‘s view that light came from objects into your eyes (against Euclid‘s theory that vision rays came out of your eyes and hit objects, the way bats use sonar). These views, in turn, were probably shaped by Mozi’s invention of the camera obscura in China.

Who was Euclid?
And Aristotle?
Ptolemy, the astronomer
Herophilus
Galen and Roman medicine

How did he figure this out?

He gave many reasons for his conclusions. One reason was that looking at the sun could damage your eyes, so brighter objects must send out stronger rays.

What is light?
More about the sun

Another reason was that you could see the whole sky and stars immediately when you opened your eyes – that would be too many vision rays to send out all at once. He also realized that rays of light came from the sun or candles. Light always travelled in straight lines, and bounced off the objects to your eyes. Ibn al-Haytham thought (correctly) that color was somehow related to these light rays.

When did ibn al-Haytham die?

Learn by doing: an experiment with light
More about Islamic science
More about the history of glass