What does A.D. mean?

What does A.D. mean? Timeline showing BC and AD dates

Looking for a Halloween costume? You can go as Jesus! Click for other great costume ideas.

Some people use C.E. instead of A.D. C.E. stands for Common Era, and people use it in order to avoid Christian references. Quatr.us feels that since this is a Christian dating system, we don’t want to try to hide that. There are other dating systems in the world that non-Christians use, and Common Era makes it sound like everyone should use the Christian system. You can also say this stands for the Christian Era, if that makes you more comfortable using it.

Are you, like, the only ones who still use A.D.?

No, a lot of people prefer A.D. The Metropolitan Museum of Art in New York, for example, also uses A.D. and B.C. So does the Smithsonian Institution in Washington D.C. (I’ve got to admit, I like having more Latin in my life. Maybe these museums do, too.)

Keep track of time with this great Panda Planner!

How did people count years before Jesus?

Of course nobody used the birth of Jesus as a way to count years back when Jesus was alive, in the Roman Empire.

(More about the life of Jesus)

People counted by the reigns of their rulers

Or they counted by the Olympic Games 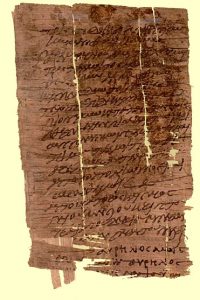 A sacrifice certificate on papyrus from Oxyrhynchus, in Egypt, dating to the Decian persecution (about 3 inches wide)

Sometimes the Romans counted by Olympiads – how many years it had been since the first Olympic Games in 776 BC. Or they counted from the (mythical) date of the foundation of the city of Rome, in 753 BC.

(More about the Olympic Games)

Fear of the millennium and the end of the world

Many Romans were afraid the world would end in the year 1000 (1000 years since the founding of the city of Rome, which we call 247 AD). The first big Roman persecution of Christians grew out of that fear. Decius was so relieved when the world didn’t end, that he called on everyone in the Roman Empire to sacrifice to the gods in gratitude.

In communities where there were a lot of Christians, like Carthage, the local governments sometimes chose to enforce this in a way that outed Christians, and then imprisoned, fined, or killed them. 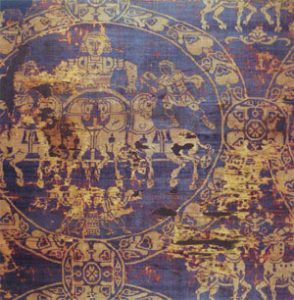 Charlemagne’s burial shroud, made of silk imported from Constantinople (814 AD)

As people converted to Christianity, though, they wanted to count their years by Christian events and not Greek festivals or Roman emperors.

Not long after the fall of Rome, in 525 AD, a few Christian priests and bishops began to count from the birth of Jesus. But most people in Europe didn’t start to use this Christian calendar until about 800 AD, in the time of Charlemagne.

(Wait, who was Charlemagne?)

Yes! In the 1800s, Christian history researchers taking a closer look at the Bible realized that they had the year of Jesus’ birth wrong. Because King Herod died in 4 BC, the birth of Jesus had to be about four to six years earlier than everyone had thought.

But it was too hard to change the system now, so we still count from the Year 1 (there is no Year 0), even though Jesus (if he really existed) was already walking and talking by then.

How did A.D. dates spread around the world?

As Europeans gradually conquered more and more of the world after 1500 AD, they brought their calendar with them. So people began to use the Christian calendar in Africa and India around 1500 AD, in North and South America a few years later, and in China and Japan only around 1900 AD, about a hundred years ago. It’s important to realize, as Rebecca Kennedy says, that ‘time is not neutral’. People around the world use the Christian calendar because colonialist Christian Europeans have recently controlled a lot of the world’s printing presses and schools, so they got to decide.

BONUS: What does P.M. stand for?

Since many of you are asking, yes, P.M. is Latin too! It is an abbreviation of post meridiem, which means “after noon” in English. So P.M. is the hours after noon: 1 pm, 2 pm, etc.

But even though this has a Roman name, it’s even less from ancient Rome than the BC-AD thing is. Roman time-keeping didn’t start over at noon: they ran 12 hours from dawn to dusk, and 12 hours from dusk to dawn. (Yes, that meant that daylight hours were shorter in the winter and longer in the summer!).

Then medieval clocks mostly had all 24 hours on the clock face, so the bottom number was 12 and the top was 24.

The phrase post meridiem came into use in 1563, in the reign of Queen Elizabeth I, when clock-makers started to use the 12 hour clock face we use today. And sure, yeah, they could have just said “afternoon.” But clocks were new and expensive, and clock-makers wanted the words about clocks to sound fancy and official.

SECOND BONUS: What about “noon”? What does “noon” mean?

Noon – when the sun reaches its highest point in the sky – was originally related in people’s minds to “south”, while midnight – in some languages anyway – was related to “north”. Probably that’s because it’s hot in the south, and it’s also hot at noon. But our word “noon” comes from the church ceremony of None.

In the Middle Ages, European Christian monks prayed eight times a day (Muslims pray five times, and Jews pray seven times), at lauds, prime, terce, sext, none, vespers, compline, and vigils. Lauds started the day when the sun rose. Prime (from the Latin word for one) was at about 6 AM. Terce (the third hour) was about 8 AM. Sext (the sixth hour) was about noon. None (the ninth hour) was about 3 P.M.

So how did it get to mean noon? Well, gradually the monks changed the time of the prayers around to be more convenient. They started to say Lauds and Prime the night before, and started their day with Terce. That moved None back to noon. By the 1100s, most people celebrated None at noon.

More about the birth of Jesus
More about BC and AD