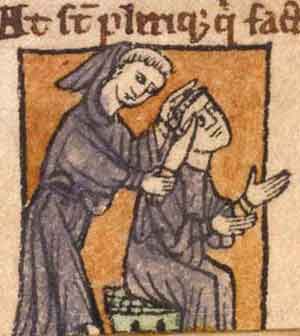 What is a monk?

Sometimes when a little boy seemed especially smart, his parents would take him to a monastery and leave him there to be taken care of by the monks and educated, and when he grew up he would become a monk. One example is Thomas Aquinas.

Monks (pronounced MUNKS) were men who devoted their lives to the service of God and of the Catholic church (there are still monks today actually). 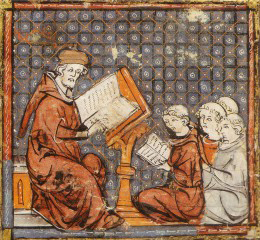 The first monks were not Christians but Buddhists, starting about 500 BC. Probably the first Christian monks, in Egypt in the 300s AD, got the idea from Buddhist monks in India; there were plenty of traders traveling between India and Egypt during the Roman Empire.

Buddhist monks
and Buddhist nuns
The Silk Road and trade

To show that they were monks, Christian men had the back of their heads shaved bald. They called this being “tonsured” (TON-soord).

About some modern Christian monks in the north of Scotland

What did monks do all day?

Christian monks lived together in a monastery (MAHN-ah-sterr-ee) under the rule of an abbot (AA-but). They prayed five times a day, and went to Mass every day. Sometimes the monks sang in choirs. In between some of the monks copied manuscripts in the monastery’s library, or taught other little boys to read and write, or did the laundry for the monastery. Other monks worked in the fields like most other people, planting grain for the monastery and harvesting it, and taking care of the monastery’s pigs and sheep and cattle.

What is Christian mass?
More about medieval books 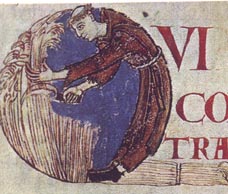 In some monasteries, the monks made wine to drink and to sell in town. Monks never married and were not supposed to have children, and they did not own any property of their own.

Why did men become monks?

Sometimes men joined monasteries when they were older. Maybe they felt drawn to a religious life, like Gregory the Great. But also this was a way to be a scientist, like Roger Bacon. And it was like going to assisted living: maybe they were so poor or sick that they wanted someone to take care of them. (For another reason, check out the story of Heloise and Abelard).

Who was Roger Bacon?
What about Heloise and Abelard? 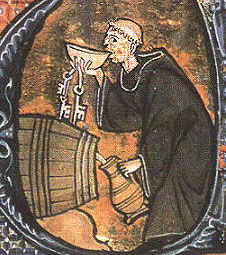 A Christian monk drinking wine (from the British Library)

Even kings and emperors, like Michael V, sometimes became monks. A stronger rival who made himself king might force the ex-king to become a monk to get him out of the way. Families sometimes also sent their boys to be monks if they had too many children. They didn’t want to have to split their farm among too many children for the inheritance. Girls couldn’t become monks, but they could become Christian nuns.

So what is a monk? Did you find out what you wanted to know about Christian monks? Let us know in the comments!

Learn by doing: visit a monastery if there’s one near you
More about Christian nuns
More about the Franciscans