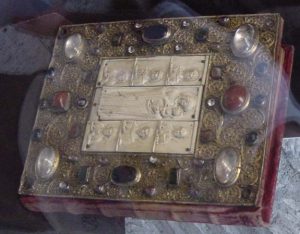 In the Early Middle Ages, as the Roman Empire was collapsing, the new power of Christianity inspired Augustine, in North Africa, and Pope Gregory the Great in Italy. They both wrote new books in Latin about Christian philosophy.

In Constantinople, Procopius wrote in Greek about Justinian’s conquests. And about the same time, Cassiodorus in Italy wrote a History of the Goths.

Once the Islamic Empire was established in the 600s AD AD, most of the universities were there. That’s where most of the writers lived, too. Very few people in Europe had time to read books, or to write them. Europe just wasn’t rich enough for that. Practically no books appeared in Europe during the 700s AD. 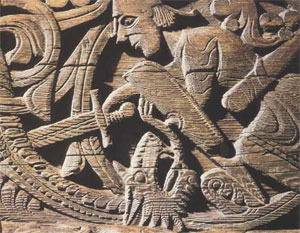 Charlemagne’s empire moved a lot of wealth from southern Europe to northern Europe, and around 800 AD Einhard wrote a biography of Charlemagne imitating the Roman biographer Suetonius. Then in Germany, about 850 AD, somebody wrote the Hildebrandsleid.

Still, books were very expensive in medieval Europe. So there weren’t very many of them. A trained scribe (often a monk) had to write each book by hand, and that took a long time. And the scribes wrote these books on parchment, which was very expensive.

People who had books took very good care of them. This book cover has jewels and carved ivory on it. Sometimes librarians chained library books to the tables so people couldn’t steal them (the way we put security sensors in library books today). 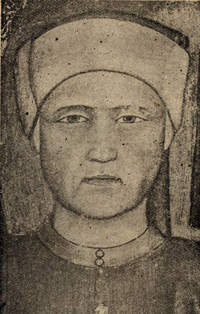 Slowly Europe began to get richer from trade. More Europeans had time to learn to read and write. Thanks to Viking wealth from trade, somebody wrote Beowulf in an early form of English about 1000 AD.

Slowly universities began to open. In France, Abelard and Heloise wrote letters to each other in Latin in the 1000s. Then in the 1200s, universities opened all over Europe.

People translated a lot of Islamic books into Latin. Then they translated them into modern European languages like Italian, French, English, and German. Students read those newly translated books. In philosophy, they read Ibn Sina and Ibn Rushd, and Maimonides. Then Thomas Aquinas wrote his own reconciliation of Aristotle and Christianity.

Dante, painted by Giotto about 1320 AD

In fiction, European students read the Arabian Nights and the Shahnameh – and then they began to write books of their own. In the 1200s, Dante wrote the Divine Comedy in Italian. Poets in the south of France began to write poems in French about the story of King Arthur.

In the 1300s, Boccaccio retold many Indian and Islamic stories in the Decameron, and then Chaucer retold the same stories in his Canterbury Tales, in English (though it is a very old-fashioned English you would find hard to read).

About the same time, German writers also wrote sagas like the Niebelungenleid. Petrarch travelled all around Europe looking in monastery libraries for old copies of Greek and Roman texts.

By the end of the Middle Ages, Europeans were writing more books than West Asians were. Everybody wanted to write their own books: Friedrich II wrote a book about falconry. Elizabeth of Poland wrote a book to instruct her daughters.

By the late 1400s, so many people in Europe wanted to read and write books that manufacturers began to make paper in Spain and Italy instead of buying imported paper, and then in Germany, Gutenberg developed a printing press so people could make lots and lots of much less expensive books. Then European literature really took off.