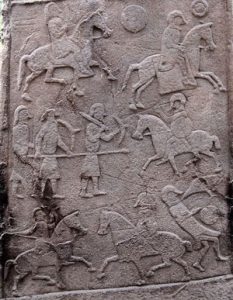 The story of Hildebrand is one of the earliest stories written in German. Nobody knows who wrote this story or exactly when, but we think somebody must have written this version about 700 AD.

The earliest copy of the story that we still have was written about 830 AD, probably in a monastery. The tragic story is set in a time around 500 AD.

The story starts with two warriors, a young man and an older man, facing each other on a battlefield, about to fight. The older man’s name is Hildebrand. Their armies stand behind them, but the two men are going to fight alone. (This was a common way of deciding battles without killing a whole bunch of men.) 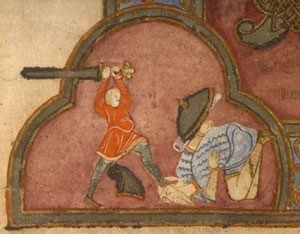 The old men told him that his father’s name was Hildebrand. They said that Hildebrand got in a fight with Odoacer, and fled to the east, where he worked for Dietrich (Theodoric the Ostrogoth). (Those were real people.)

Who was Odoacer?
Theodoric the Ostrogoth

When Hildebrand fled, he left behind his wife and their little son, and he, Hadubrant, is that son. Hadubrant thinks his father must be dead.

Hildebrand figures out the deal

Hildebrand hears this story with a sinking heart. That’s enough information for him to realize that Hadubrant must be his own son, now grown up. He himself, just as Hadubrant says, ran away from Odoacer, left his wife and his baby, and worked for Dietrich. Now that he has finally gotten to see his baby, he doesn’t want to fight him!

Hildebrand tells Hadubrant that he’s his father,and tries to get out of the fight. He offers to give Hadubrant some gold arm-rings that he got as a present from the King of the Huns (Attila), when he was working for Dietrich.

But Hadubrant isn’t convinced. He thinks his father is dead, and he’s sure Hildebrant must be trying to trick him. Or maybe he is afraid to fight. Anyway, Hadubrant says there’s no way out of it. Hildebrant sees that if he doesn’t kill his son, then Hadubrant will kill him.

What’s the end of the story?

They start to fight, and both of their shields are smashed to bits. But that’s where the Hildebrandsleid breaks off. We don’t have the end of it, and nobody knows what would have happened. Wouldn’t it be interesting to have everyone in your class write the end of the Hildebrand story? See what you think would have happened. Or, if you are studying on your own, write an end for it yourself – what would you like to see as an ending?

P.S. – Most modern scholars now think that the poem must have ended with Hildebrand killing Hadubrant. The story may be related to the Iranian story of Sohrab and Rustem. In turn, that story seems related to the Indian story of Dushyanta. That might be because the Indians, the Persians, and the Germans are all descended from the Yamnaya in Central Asia. Or it might be because some traveler had heard this famous Persian story and retold it in Germany as the Hildebrandsleid.