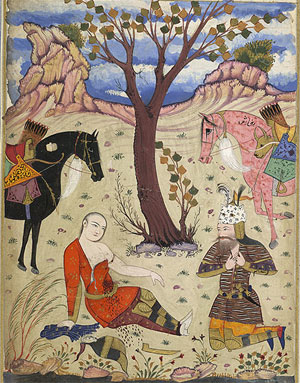 Sohrab and Rustem: The death of Sohrab (Iranian painting)

Where did this story come from?

This story is probably an old Indo-European story that Persian people told even before they moved south into Iran about 2000 BC. It’s probably related to the Indian story of Dushyanta, the German story of Hildebrand and the Greek story of Achilles and Penthesileia, though sometimes Rustem is also a trickster like Odysseus, or like the Indian Krishna (you may want to compare them).

Who were the Persians?
Dushyanta and Shakuntala
Hildebrandsleid
Achilles and Penthesileia
Arabic literature
All our Islamic Empire articles

Who wrote this version?

In the story, Rustem was a great hero, who rode a famous horse, Rakush, and who fought for many kings. 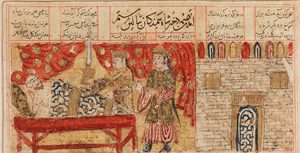 The beginning of the story

One day when Rustem was sleeping in the forest, someone captured his horse. The kidnapper turned out to be the princess Tahmina, who had fallen in love with Rustem. “I will only give back your horse if you marry me,” she cried. So Rustem married her, and got back his horse.

But when Rustem went back home, he didn’t take his new wife Tahmina with him. Instead, he left her his arm-ring. “If the child you’re carrying is a girl, give her this from her father to wear in her hair. But if it’s a boy, tell him to wear it on his arm, to give him strength,” Rustem said as he rode away.

When the baby was born, it was a boy, and Tahmina named him Sohrab. But the princess told Rustem that the baby was a girl. She was afraid that if Rustem knew the baby was a boy, Rustem would want to take the boy away from her and raise him himself. But she did tell Sohrab about his father Rustem, the great hero.

When Sohrab grew up, he became a great warrior like his father. He told his mother he would conquer the kingdom of Persia and rule it with his father Rustem. But when Sohrab attacked Persia, of course Rustem was fighting on the other side. Sohrab asked other soldiers to point out which one was Rustem, but nobody would tell him.

When Sohrab and Rustem finally met in battle, they both felt a sudden thrill, but they couldn’t tell why. Sohrab asked Rustem whether he was the famous hero, but Rustem thought it might be a trick, so he said he wasn’t. They fought for three days, and on the fourth day, Rustem stabbed Sohrab so that all his blood was running out of him. As he lay dying, Sohrab said, “Whoever you are, you will pay for this! My father Rustem, that I came here to find, will avenge me.”

End of the story

When Rustem heard this, he was heart-broken to think he had killed his own son. He looked at his son’s bracelet, and it was the same one he had given to the princess. Rustem tried everything to save Sohrab, but it was too late. In his grief, Rustem burned everything he owned – his armor, his tent, and all his treasures, all went up in fire.