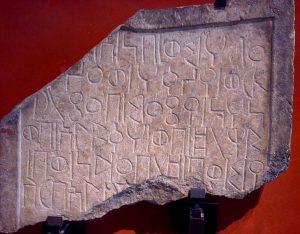 Where did Arabic come from?

But in Israel and Syria, Semitic languages mixed more with Indo-European and other language groups. So the language changed into Hebrew and Aramaic.

When did people start to write Arabic?

Until the time of Mohammed, in the 600s AD, people mostly spoke Arabic and didn’t write it. Still, there are some written records from the Arabian peninsula from before the 600s AD. We call these Sabataean. But Sabataean writing is only short inscriptions in stone, not literature.

Who was Mohammed?
The Early Middle Ages

Arabic and the alphabet

The alphabet first came to the Arabian peninsula not too much before 400 AD.  Very soon, people used it to write Arabic. So the Arabic alphabet, like all the other alphabets in the world, comes from the first alphabet invented in the Levant (in the Sinai).

History of the alphabet
Source of alphabet letters

Arabic spreads to Africa and India

But Arabic had a bigger future ahead of it. After the Islamic conquests of the late 600s AD, people started to speak Arabic all over the Islamic Empire. People spoke Arabic from Afghanistan to Spain. By 1000 AD, some people knew Arabic even in India and East Africa.

Many people began to write in Arabic. Among the first things they wrote was the Quran. But soon scientists and doctors wrote many Arabic scientific texts. They wrote medical books and math books.

What is the Quran?
Medieval Islamic science

People also wrote Arabic stories like the Arabian Nights or the Shahnameh.

Arabic writers retold older stories from other places. The Greek story of Odysseus and the Cyclops finds its way into the story of Sinbad the Sailor. Arabic writers also retold the Buddhist Jataka Tales from India as Nasruddin stories.  (You can compare stories about the trickster Nasruddin to African Anansi stories, too)

There were many Arab historians, geographers, philosophers, and poets, both men and women.

But in the eastern part of the Islamic Empire, many people still spoke and wrote in Persian (an Indo-European language). One famous Persian story, written about 1000 AD, is the story of Sohrab and Rustem.

Here’s a song by Yusuf Islam (who used to be Cat Stevens) to teach the Arabic alphabet:

Beginning in the later medieval period, Turkic and Altaic people from Central Asia moved into West Asia. These people also told or wrote stories in Turkish. They wrote their own stories, like the Alpamysh.

Learn by doing: learn to write the Arabic alphabet
The Shahnameh
The Arabian Nights
Ancient Islam

Bibliography and further reading about Arabic and Islamic literature: