What is the Quran? – Islamic religion 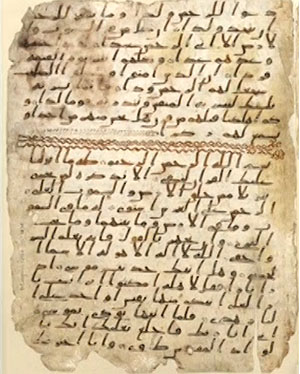 What is the Quran? A page from a Quran of the Umayyad period (600s AD), now in Birmingham, England

What is the Quran?

The Quran is the holy book of the religion of Islam, as the Bible is for Christians and the Torah is for Jews. The Quran was written in Arabic, a little bit after the death of Mohammed in 632 AD.

For Islamic believers, memorizing many verses from the Quran is a way of honoring God, or Allah. Children often memorized the whole Quran as they went through school.

According to believers, the Quran is the words of God, passed by the angel Gabriel to the Prophet Mohammed, written down so they will not be forgotten.

(Life of the Prophet Mohammed)

What does the Quran say?

Like the Torah and the Bible, the Quran told believers how to be good. The Quran says that people should not drink wine or beer, for instance.

(More about the history of wine)

Like the Jewish Torah, the Quran said that people should not eat meat from pigs. Most people in the Eastern Mediterranean and the Arabian Peninsula, especially richer people, already didn’t eat pigs. They had thought it was nasty to eat pigs for thousands of years, since the Egyptian New Kingdom. So they would have thought this was a good idea to have in the Quran, and just normal, the way they ate anyway. For poorer people, not eating pigs was the way they wanted to eat if they could afford it.

(More about the history of pigs)

The Quran and the rights of women

Also, the Quran gave many rights to women that women had not had before. Women inherited money from their parents, and kept control of their own money when they were married, and they could get a divorce if their husband beat them.

(What were women’s lives like under the Islamic Empire?)

What stories are in the Quran?

Bibliography and further reading about the Quran: