What is Sufism? History of Islam 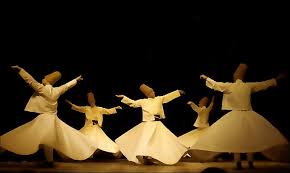 Not long after the foundation of Islam and the life of Mohammed, about 650 AD, there were people who became known as Sufis (SOO-fees). Sufis can be Sunni or Shiite. These people wanted a more direct relationship with God. Instead of just doing things like praying or good deeds, or the Hajj to Mecca, Sufis wanted to experience the greatness of God within themselves, through meditation or through ecstatic dancing or in other ways.

Here’s a video of some Sufi dancing.

The “whirling dervishes”, for example, are a branch of Sufism that got started about 1300 AD in the Seljuk empire, where people used dancing to get themselves into a religious frenzy that helped them have a personal experience of God.

Other Sufis, like al Tusi in the 1200s AD, were more philosophical, looking for ways to use logical thought to get closer to God. In this way they were like the Neo-Platonists of a thousand years earlier.

Another way that Sufis tried to get closer to God was by eating roasted coffee beans, which they got from East African traders. Sufi people were the first people outside of East Africa to use coffee, about 1450 AD.

Sufis wrote a lot of great poetry, as another way of helping people make that connection to God. An Indian poet, a woman called Lalla Arifa, for example, wrote Sufi poetry in the 1300s AD.

This desire to connect directly with God is present in other faiths as well – you might want to compare Sufiism with Buddhism, or Taoism, or the early Christian heresy of Montanism.

Bibliography and further reading about Sufism: