Next the mother and father made men out of wood. But these wood men were dull, with no emotions, and they couldn’t feel gratitude to their makers (compare the Jewish story of Noah). Finally the mother and father tried again and made men out of corn (maize) – and that worked just right. Corn was the main food for Mayan people, so they had a lot of popular stories about corn, like the story of the opening of Maize Mountain.

Where does corn come from?
The Mayan Corn God
The story of Maize Mountain 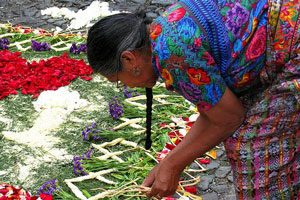 What holidays did Mayan people celebrate?

There were many big religious holidays every year in the Mayan empire. One was the five “Lost Days” at the end of the Mayan solar calendar every year. Mayan priests and leaders held big parades to celebrate the holidays. Women laid out grass and leaves and flowers in patterns to make beautiful (but temporary) carpets for the paraders to walk on. (Compare this tradition to the Diwali celebrations in India) 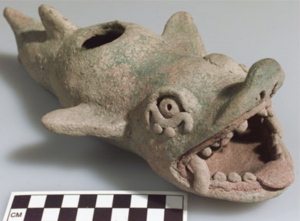 A Maya pottery shark, from Belize

But even before the Mayans grew plants, they were fishing people, and they seem to have hunted sharks – our word “shark” may come from the Mayan word – and used shark teeth as a symbol of power. Long after many Mayan people moved away from the coast and became farmers, they still bought shark teeth and carved pictures of sharks.

History of fishing
More about sharks
Evolution of teeth