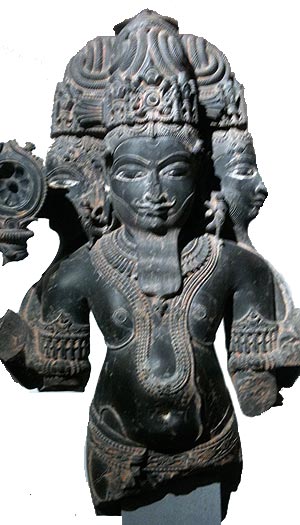 Who was the god Brahma?

Brahma was, along with Vishnu and Shiva, one of the three main gods of Hinduism.

Vishnu came first, according to Hindu stories, and then Brahma was born out of Vishnu’s belly-button. In Hindu thought, Brahma was the creator god, while Vishnu preserved the universe and Shiva was the destroyer.

In the beginning of time, Brahma wanted to create the world. So he divided himself into a girl half, called Gayatri, and a boy half, Shiva, and together they made the world.

Gayatri didn’t want to have anything to do with Shiva, and ran away from him, but Brahma made himself have heads looking in every direction so she couldn’t get away – that’s why you see him here with four heads.

What is the Rig Veda?
Who are Zeus and Hera?
Isis and Osiris
Plato’s story about love

People said that the Rig Veda and other sacred Hindu texts came out of Brahma’s heads. (Compare the story of Brahma and Gayatri to the relationship between the Greek gods Zeus and his sister Hera, or the Egyptian gods Isis and Osiris. Or maybe we should think of Plato’s story about people coming in half)

Who were Brahma’s children?

Brahma, as a creator god, had a lot of children; among his many sons were Dharma and Karma.

Learn by doing: visit a Hindu temple
More about Hinduism