What is dharma? Hinduism – India 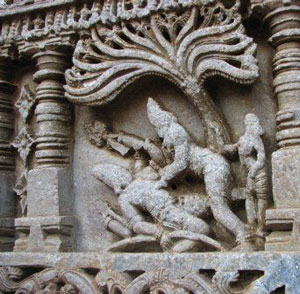 What is dharma? Arjuna fights Shiva (in a story from the Mahabharata) because that is his dharma

Dharma is an Indian idea

Dharma is a Sanskrit word originally meaning order or solidity or normality. It comes from an earlier Indo-European (Yamnaya) word meaning firm, solid, like wood or a tree.

Who were the Yamnaya?
What is Hinduism?
Early Indian religion
All our India articles

What does dharma mean?

Greek nomos and physis
Chinese Taoism
What is nirvana?

People sometimes think of dharma as being related to the Chinese idea of the Tao – the Way, that is the right way. The more you live in accordance with your dharma, the quicker you stop being reborn and get to nirvana.

What is caste?
Indian caste project
Slavery in medieval India

Dharma and the Bhagavad Gita

The Bhagavad Gita is a section of the Indian epic The Mahabharata where the god Krishna explains dharma to the prince Arjuna. Arjuna doesn’t want to fight and kill people in a battle, but Krishna tells him that it is his dharma, and finally Arjuna agrees to fight.

So what is dharma? Did you find out? Let us know in the comments!