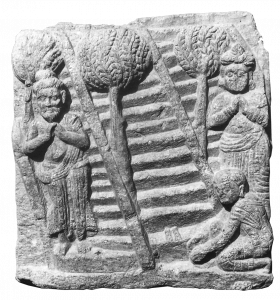 The rise of Buddhism in India during the Mauryan Empire brought with it a new interest in carving the stories of the Buddha’s life. And Indian artists were now seeing scenes from Greek mythology on the metopes of Greek temples built in Afghanistan and Iran.

What is Buddhism?
Triglyphs and metopes
The Mauryan Empire
Mauryan architecture
All our ancient India articles

So Mauryan artists used those scenes to create their own square scenes on their own stupas. And they illustrated the life of the Buddha. Mauryan artists added a lot of new ways of showing things though. There aren’t any long staircases in Greek metopes, for example, but there is one in this carving. (The Buddha is invisible; you can see his footprints near the bottom of the staircase.) 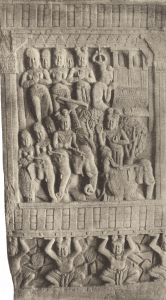 King Ajatasattu arrives with his elephants and attendants and wonders why everything is silent. When he sees everybody is meditating, he prays to the Buddha himself. (Bharhut Stupa in central India, about 150 BC)

Here’s another scene from the Bharhut Stupa, in central India, from about the same time. King Ajatasattu arrives at the mango grove of the physician Jivaka with elephants and a crowd of attendants. He is surprised that it’s super quiet, when there are 1500 people there. It turns out everybody is silently meditating. The king is impressed by their devotion and prays to the Buddha on the top right. Again, the Buddha himself is invisible, but you can see his footprints at the base of the little structure.

Also, do you see the little sunshade that servants are holding over the king’s head in the center? It’s a lot like the one the Persian king Xerxes had in his slightly earlier relief. Mauryan art, which needed to represent new stories, took patterns and ideas from Iranian and Greek images.

Learn by doing: check out a Buddhist temple
More about the Mauryan Empire
More about ancient India

Bibliography and further reading about the Mauryan Empire:

Note: The first of these is a comic book, but it’s a good story!