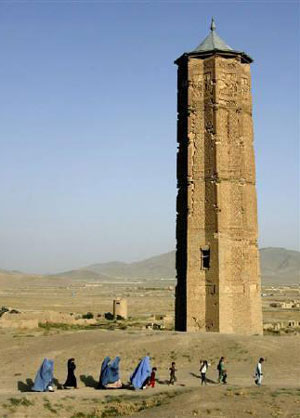 Ghaznavids: A minaret in Ghazni (Afghanistan), from about 1000 AD

Beginning in the 850s AD, the Abbasid caliphs of the Islamic Empire were looking for soldiers they would be able to trust, who were not other Arabs who would be trying to get into power.

Who were the Abbasids?
The High Middle Ages
All our Islamic Empire articles

The Abbasids thought that the Turks would be trustworthy soldiers. So they captured a bunch of young Turks as slaves and made them become soldiers.

History of slavery
Who were the Turks?
All our Central Asia articles

The Turks were in fact very good soldiers. But they were so important to the Abbasids as soldiers that they were able to get more and more power for themselves. In 962 AD, the Abbasid caliph tried to fire Alptigin, the general in charge of Khurasan (modern Afghanistan). 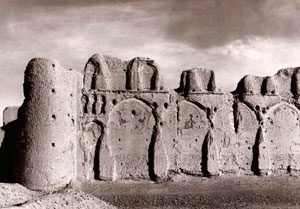 But Alptigin didn’t want to be fired. He marched south and captured the fort of Ghazni from the Samanids who had been ruling it.

He died the next year, but his enslaved soldiers took over for him and made Afghanistan into their own independent kingdom.

People called these soldiers the Ghaznavids after their fort. They took Kabul in 977. Under their great sultan Mahmud, Alptigin’s grandson, they captured Herat from the Samanids in 1000, and ruled part of Persia (modern Iran) too. Then the Ghaznavids began to invade India.

India and the Guptan Empire 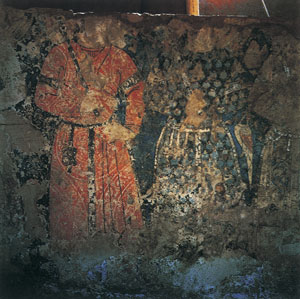 Painting from the Lashkari Bazar of two palace guards

At first Sultan Mahmud’s invasions of India were mainly to get gold and enslave people and to destroy images, because Islam said that God didn’t like any images of people, animals, or even plants or buildings.

What is iconoclasm?
What is Hinduism?
Medieval Hindu temples

Mahmud destroyed many Hindu temples of northern India in these raids, including a famous temple to Shiva in Gujarat.

Mahmud got so much plunder that he built a beautiful palace at Ghazni. He had 2500 elephants there! In the winter, when it was too cold at Ghazni, Mahmud and his whole court would move down to Bost (with all the elephants).

The end of the Ghaznavids

But eventually Mahmud conquered the Punjab (modern Pakistan and northern India) and took it over as its ruler. Mahmud ruled for about 30 years before he died in 1030 AD. But the Ghaznavids didn’t last very long after that. By 1040 the Seljuks and the Ghuris conquered them.

Bibliography and further reading about the Ghaznavid Dynasty: