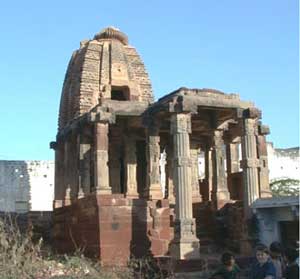 By the 700s AD, after the collapse of the Guptan Empire, there were two different styles of temple-building in India, a north Indian style and a south Indian style.

This temple from Osian shows the north Indian style. It has a high tower called a shikhara, and an open porch for visitors to the temple, called a mandapa. North Indian temples also had a high porch, like earlier Etruscan and Roman temples. They had flat stone roofs. 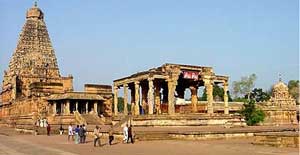 In south India, about 1000 AD, the Chola king Rajaraja the Great (his name means King-king) built a very big temple to the Hindu god Shiva. South India was richer than North India, so they could build bigger buildings.

Like the northern temples, the southern temples also have flat stone roofs. This temple is about fifty feet high, not counting the tower. (Compare this to Romanesque churches in Europe built about the same time, or to the Fatimid mosques in Egypt.)

Why didn’t India use steel for building?

By 1061 AD, India was a leading manufacturer of steel. Some builders in India started to use a new method of building using iron beams to replace wooden beams, because wooden beams were very hard to get in India.

One example is Brahmeshwar temple in eastern India at Orissa. This might have led to reinforced steel buildings, except that steel was also very expensive – smiths didn’t know how to make large amounts of steel cheaply yet.

Learn by doing: find a big building near you with wooden beams. Where did the wood come from?
More about Indian Architecture (the Muslim conquest)
More about the Chola kings

More about Indian Architecture (the Muslim conquest)
And more about the Chola kings
More about ancient India
Quatr.us home