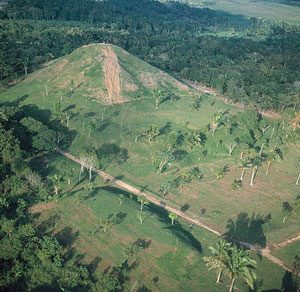 The earliest big buildings from South America are in Ecuador and Peru, along the Pacific coast. The Norte Chico people and the Valdivia people built stone temples there as early as 3500 BC.

Later on, people also built stone buildings in Central America (modern Mexico). Olmec people built them about 1150 BC. Olmec kings got their people to build groups of big stone temples at Tenochtitlan and other Olmec cities. People built these temples out of limestone.

For several hundred years only Olmec people built big stone buildings. By about 700 BC, though, other people in Central America also began to build temples. The Maya built stone temples in Central America (modern Guatemala). Most of the greatest Maya temples are from between 250 BC and 900 AD, although some were built later.

People further south, who were in the Moche kingdom (modern Peru), built stone palaces and temples beginning about 100 AD. The most famous of these are the Pyramid of the Sun and the Pyramid of the Moon. After the collapse of the Moche, the Inca conquered most of the Pacific coast of South America (modern Peru and Ecuador). They also built many big stone buildings.

Further north, in the Aztec kingdom, there were also big stone buildings, both palaces and temples. People built the earliest Aztec buildings about 1300 AD.