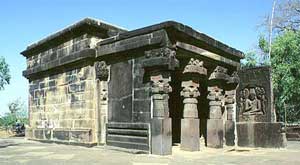 When the Mauryan empire collapsed, about 200 BC, for more than five hundred years Indian leaders were too busy fighting wars against each other to build any big buildings. But around 350 AD some victorious leaders formed a new empire, the Guptan Empire. Once there was peace, people began to build again, and, for the first time, they began to build free-standing stone temples.

By by this time not so many Indian people were Buddhists anymore, and the new temples were mainly Hindu temples. These first stone temples were built to honor the Hindu gods like Krishna and Vishnu.

What is Hinduism?
Who is Krishna?
What about Vishnu?

The earliest stone temple is a small one at Tigawa, in central India. The Tigawa temple has a small stone chamber, with a flat stone roof, and a porch supported by four carved stone columns in the front. The temple’s thick walls and small size show that the builders were not used to working in stone yet. 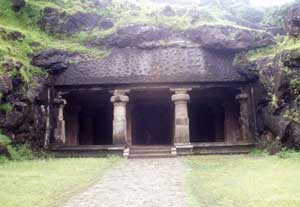 But people kept on cutting rock-cut temples too. Around 600 AD, builders in Mumbai carved the rock-cut temple of Elephanta Cave in Mumbai, a temple to the Hindu god Shiva. Like the earlier Tigawa temple, Elephanta has a porch with four columns in front, and a room with a statue of Shiva in the back.

People also carved many more rock-cut temples at the old site of Ajanta, near Mumbai. These later temples are much fancier than the earlier Mauryan period temples. And, between 600 and 1000 AD, they carved many other temples at a new site at Ellora, not far from Ajanta. So while some Guptan temples are free-standing, many others are still being cut into cliffs.

More about the Ellora cave temples 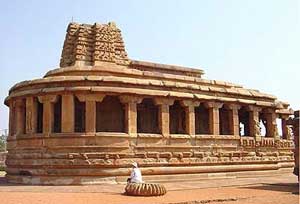 At the same time, other Indian builders were working in the Chalukya kingdom in southern India. Chalukya builders began to work in stone at about the same time as in northern India. At Aihole (eye-HO-lee),they built six stone temples between about 500 and 800 AD.

What is cement?
More about Roman temples
What is an apse?
St. Sernin in Toulouse

Around this time, Indian builders began to use cement mortars to hold the stones together. This Durga Temple, from about 675 AD, has a central room with solid walls and columns all around the outside, like a Roman temple. The apse is curved, which is unusual in Indian temples, and there’s a tower on top of the flat roof, like the towers on the crossings of early medieval Christian churches about the same time.

Learn by doing: draw a blueprint for a temple you designed yourself
More about Indian Architecture (the Middle Ages)