Who is Krishna? Hinduism in India 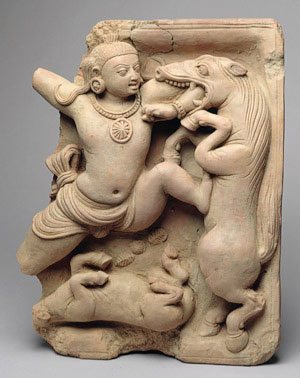 Krishna is one of the Hindu gods. He was actually just one of the many forms of the god Vishnu. People thought of Krishna as one reincarnation of Vishnu. He’s a god of kindness and love, and being strong enough to fight for what is right.

Who was Vishnu?
More about Hinduism
Indian religions
All our India articles

He doesn’t appear in Indian stories before about 300 BC. Probably he and Vishnu were both newer gods that came into Hinduism around the time of the Mauryan Empire. About this time, the older gods like Indra, with their demands for animal sacrifice, started to seem old-fashioned.

The Mauryan Empire
The end of sacrifice
Empires timeline

Krishna appears in many stories in different forms. Sometimes he is a child. Sometimes he’s a flute-player who calls people’s souls. Other times he is involved in love affairs with other Hindu gods, or he’s a great leader.

Because Vishnu often took the form of Rama, and Krishna is a form of Vishnu, he and Rama are also in some ways the same. Rama’s wife was Sita, and she’s sometimes thought of as a form of the god Lakshmi, so Lakshmi is also sometimes Krishna’s partner.

The Ramayana
The god Lakshmi

What is dharma?
What is the Bhagavad Gita?
The Mahabharata

Learn by doing: visit an art museum and look at Indian art about Krishna
More about the Bhagavad Gita
More about Vishnu

Bibliography and further reading about Krishna: