Who is Lakshmi? Hindu god – India 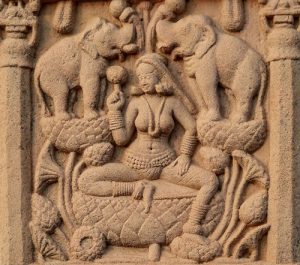 What is she the god of?

Lakshmi was (and is) a Hindu god of light, wealth, good luck and success. Her name comes from the Sanskrit word laks, which can mean “light” or “goal”. And that comes from an earlier Yamnaya word for “bright and shiny.”

Who were the Yamnaya?
What is Hinduism?
Indian religion
All our India articles

There are statues of her starting about 500 BC, but she probably became a lot more important around 300 BC, in Mauryan India. That was about the same time that Indians got more enthusiastic about her husband, the sun god Vishnu. Jain and Buddhist people also worshipped her.

Buddhism in India
Who are the Jains?
The god Vishnu
Mauryan India

Lakshmi, found at the Roman city of Pompeii in southern Italy (ca. 50 AD)

She has gold skin. She rides on an owl so she can see her way through dark times. And she holds a lucky lotus flower in her hand. She sometimes has four arms to represent the four goals of dharma (duty), kama (love), artha (success), and moksha (wisdom), but in this statue below, the elephants represent those goals.

She was born out of foamy milk, floating on the ocean on a lotus flower (compare this to the Greek Aphrodite). 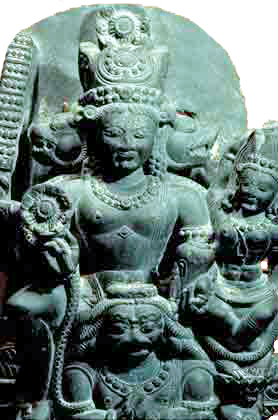 Because Vishnu often took on the forms of the prince Rama and the god Krishna, Lakshmi also took on the forms of Rama’s wife Sita and Krishna’s wife Rukmini. Indian people sometimes thought of all women as different forms of Lakshmi, and of Lakshmi as one small part of Vishnu – light is closely related to the sun, but they’re not equals. That reflects the way human women in India also were not treated as equals.

Who is Krishna?
Rama and the Ramayana

Because she is a goddess of light, people made offerings to her during the Hindu festival of lights, Diwali, in the fall.

People also made offerings to her when they were getting married (as the Greeks did with Hera), and any time they needed good luck or money.

Bibliography and further reading about the goddess Lakshmi: