The Ramayana – A Hindu story – India 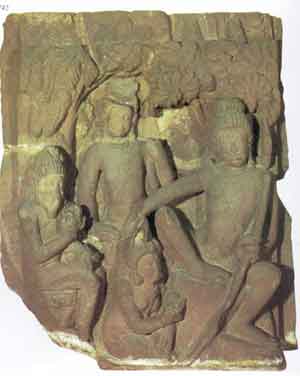 A scene from the Ramayana: Rama in the forest (a Gupta carving of the 400s AD, now in New Delhi)

What is the Ramayana?

The Ramayana is a story from ancient India that is a very important part of the Hindu religion.

More about Hinduism
All our ancient India articles

When was the Ramayana written?

Most people think the Ramayana was written down around 800-300 BC, during the Vedic period (the Iron Age).

The Vedic period
What else was going on then?

The Ramayana tells the story of a battle between the Hindu god Vishnu and a demon called Ravana. None of the gods could fight Ravana because of a promise they had foolishly made earlier, and Ravana was messing with everyone and nobody could stop him. So Vishnu decided to be reborn as a man, and then he would not be a god and he would be able to fight Ravana.

So Vishnu was born as the prince Rama. Rama was supposed to be king when his father died, but at the last minute his father decided to make his brother king instead.

Rama and his other brother Lakshmana and Rama’s wife Sita went away to live a simple life in the forest. But when they were living in the forest, the demon Ravana’s sister fell in love with Rama and tried to get Rama to leave Sita and come live with her. When Rama said no, Ravana’s sister attacked him, but Rama and his brother Lakshmana fought her off.

The demon went back to her brother Ravana on the island of Lanka (modern Sri Lanka) and complained to him that Rama had been mean to her and attacked her. Ravana was very angry because Rama had beaten up his sister (compare the story of Phaedra). Also, Ravana’s sister told him how beautiful Rama’s wife Sita was. So he went to the forest to see for himself.

When Ravana got to the forest, he found that Sita was indeed very beautiful, and he stole her away from Rama and took her back to Lanka with him. Sita was very sad there and missed Rama very much. (Compare the story of Helen of Troy, written in the 700s BC, about the same time as the Ramayana.)

Hanuman, King of the Monkeys

Rama and his brother Lakshmana needed help to rescue Sita, so they went to see the king of the monkeys, Hanuman, who had the magic power to make himself bigger or smaller. Hanuman found Sita on the island of Lanka and told her that Rama was coming to save her. Sita was very happy, but then the demon Ravana caught Hanuman and set his tail on fire! In the end, though, Hanuman escaped and set fire to the whole island of Lanka.

Hanuman went back to the forest and got Rama and Lakshmana, and they all went back with the whole monkey army to attack the island of Lanka. The monkeys made a bridge over to the island. There was a terrible battle, but finally Rama killed the demon Ravana.

Rama finally could go rescue his wife Sita! But when he found her, he was worried if she still loved him. Maybe she had fallen in love with Ravana while she was his prisoner? Rama made Sita walk through fire to show that she still really loved him. And even after she did that, and she was having his twin babies, Rama ended up sending her to live somewhere else. But in the end, Rama and Sita’s twin boys came back to their father Rama.

Learn by doing: a Ramayana project
More about the Mahabharata

Bibliography and further reading about the Ramayana:

Rama and the Demon King: An Ancient Tale from India , by Jessica Souhami (2004). A less violent version for little kids.

The Ramayana for Children, by Bulbul Sharma (2004). The Ramayana retold for kids. Cool scary pictures.

Hanuman, by Erik Jendresen (2004). A retelling of the Ramayana for kids, from the point of view of the monkey king Hanuman.

Ramayana: India’s Immortal Tale of Adventure, Love and Wisdom, by Krishna Dharma (2004). The complete text of the Ramayana in a modern English translation.

More stories from India
And more about Hinduism
More about India
Quatr.us home