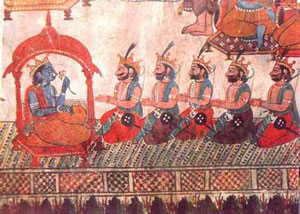 Pandava brothers from the Mahabharata

What is the Mahabharata?

The Mahabharata is a collection of many different stories around one central story. That’s something like the Jewish Bible, or the sayings of Confucius in China Both of those were both written down just a little before the Mahabharata.

Main plot of the Mahabharata

This is the central story: The five good Pandava brothers fight with their cousins, the hundred bad Kaurava brothers. They’re fighting for control of the cities of the upper Ganges river and the Jumna river (in north-western India). Many Hindu gods, and especially Krishna, help the Pandavas. So in the end, the Pandavas win.

Who is Krishna?
The Vedic period in India

Other parts of the story 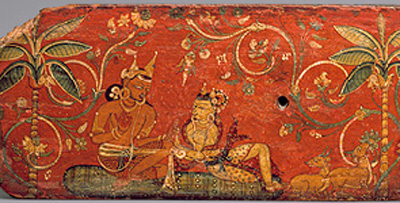 But the story has thousands of pages. It tells many other stories about the characters. One part is the earliest known version of the Cinderella story. Another important part of the Mahabharata is the Bhagavad Gita. The Bhagavad Gita is a kind of speech about how to be good. What is a person’s duty? When is it right to fight? The Bhagavad Gita is the main way people in India thought about right and wrong, like Jesus’s Sermon on the Mount or the Ten Commandments for Christians.

When was the Mahabharata written down?

The Mahabharata more or less tells the story of Vedic conquests in India around 1000-800 BC. It was probably first composed around 500 BC. Then people wrote it down around 300 BC, in Sanskrit. That was not long after people in India first started using the alphabet. Again, that’s also not long after when people first wrote down the Jewish Bible and Confucius’s sayings. It would be in the time of the Mauryan Empire.

The Mauryan Empire
History of the Alphabet

In the Mahabharata, the gods are always on the side of the Vedic Pandava brothers, and never help the bad Kauravas. The bad guys, in fact, are often represented as snake-people. (Compare the Greek story of Perseus and Medusa, from about the same time). But it’s not all one-sided. The Mahabharata tells stories of heroism and friendship, like the story of Karna and Duryodhana, about the Kauravas too.

Read the Mahabharata for yourself!

This is the Vedic view of things – the Harappan or Dravidian people who lived in India would have taken a very different view of who was good and who was bad. The Vedic people, after all, were invading the Dravidians’ country and taking it over. But the Vedic people won the war, and so their version of the story also won.