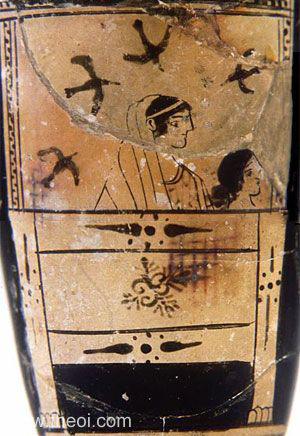 Perseus and Medusa: Danae and Perseus adrift in their box

Once there was a good king, but he died. His bad brother killed him so that he could be king. The bad brother needed to get rid of the good king’s wife (Danae) and baby (Perseus), but he was afraid to kill them too. So he put them in a wooden chest and he dropped the wooden chest in the ocean.

After a long time they drifted ashore in a new kingdom. Perseus and his mother Danae stayed there while Perseus grew up. But after a while the king of the new place wanted to marry Danae, but she didn’t want to marry him. This king wanted to get rid of Perseus for awhile so he could make Danae marry him.

So the king sent Perseus on a quest, to kill the monster Medusa and bring back her head. 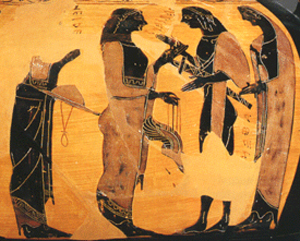 Perseus and Medusa: Athena gives Perseus his winged sandals (in a different variation of the story)

At first Perseus didn’t know where to find Medusa, so he went and asked the three Fates. The Fates were very old and they only had one eye and one tooth between them and they took turns every day, passing the eye and the tooth between them. When Perseus came to them, at first they didn’t want to tell him where Medusa was. But Perseus waited until they were passing the eye from one to another, and so none of them could see. Then he quick grabbed the eye! The Fates had to tell Perseus where Medusa was in order to get their eye back.

Then Perseus met the god Hermes, who gave Perseus winged sandals to wear so he could fly to where Medusa was, and fight from the air. And he met the goddess Athena, who gave him a sword and a shield. Athena told Perseus not to look at Medusa or her ugliness would turn him to stone. Instead he should use the shield as a mirror and look in that to cut off Medusa’s head.

Learn by doing: making a Greek shield
More about Perseus
More about Medusa

Bibliography and further reading about Perseus