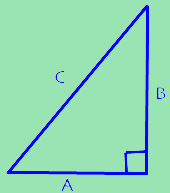 This is the proof of the Pythagorean Theorem supposedly written by Pythagoras about 500 BC:

The Pythagorean Theorem says that in a right triangle, the sum of the squares of the two right-angle sides will always be the same as the square of the hypotenuse (the long side). A2 + B2 = C2. Try it yourself: if Side A is 4 inches long, and Side B is 3 inches long, then 4×4=16, and 3×3=9, and 9+16=25, and so Side C will be 5 inches long. Try it with other size triangles and see if this is still true (you can use a calculator, or your computer, to figure out the square roots).

But how can you know that this is always true, every single time, no matter what size the triangle is?

Take a straight line and divide it into two pieces, and call one piece a and the other piece b, like this:

Now make a square with this line on each side, like this:

and draw in the lines where A meets B on each side to make four smaller shapes. 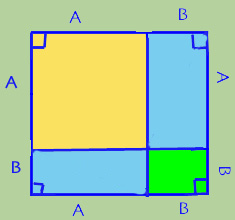 Now draw diagonal lines across the blue rectangles, making four smaller blue triangles. Call those lines C. Do you see that you have made four blue right triangles, whose sides are A, B, and C? 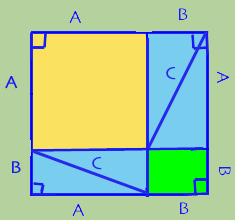 Now imagine that you take these triangles and rearrange them (or if you print it out you can cut them up with scissors and really rearrange them) around the edges of the square like this:

The little triangles take up part of the square. The area of all four triangles together is the same as the two blue rectangles you made them from, so that is 2AB.

The area of the pink square in the middle is CxC or C2. 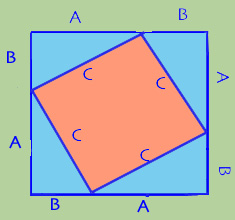 Learn by Doing – Proving the Pythagorean Theorem
More about Pythagoras

Bibliography and further reading about Pythagoras:

What’s Your Angle, Pythagoras? A Math Adventure, by Julie Ellis and Phyllis Hornung (2004). For teens.

Pythagoras and the Pythagoreans: A Brief History, by Charles Kahn (2001).