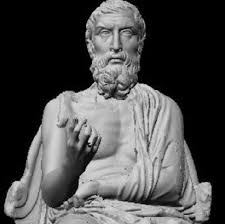 A statue of the philosopher Epicurus, carved later, long after he died – Epicurean philosophy

When did Epicurus live?

Another philosophical group which developed in the Hellenistic period, around the same time as the Skeptics, was the Epicureans. Epicureans were named after their founder, Epicurus, who lived around 300 BC.

Who were the Skeptics?
More Greek philosophy
All our Ancient Greece articles

What did Epicureans believe?

The Epicureans said that the best way to be happy and not sad was to not want anything. It’s wanting things that leads to pain. If you’re always wanting more things, then you can’t enjoy the things you do have, because you’re always suffering the sadness of not having things. (You might want to compare this to the Chinese philosophy of Taoism).

The Epicureans advised people not to make close friends or fall in love, because it could lead to sadness if your friend went away or died. The less you want, the happier you will be. These ideas, like the ideas of the Skeptics, may have been learned partly from Indian philosophers.

Buddhism: an Indian philosophy
Who were the Skeptics?
A Greek story about friendship 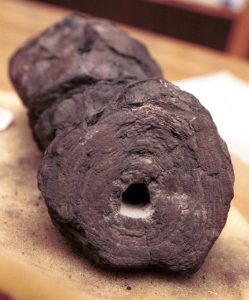 A Roman papyrus scroll from a library of Epicurean philosophy (Herculaneum, Italy)

No life after death

The Epicureans also taught people that when they died, their soul would die with their body, because both were made of atoms that would be broken up and made into other things when you died. They said that therefore people should not be afraid of dying or worry about what would happen to them after they died.

Don’t be afraid of the gods

The Epicureans also said not to be afraid of the gods, because the gods did not interfere with people’s lives. When things happened, it was just because of natural, scientific causes, and nothing to do with the gods.

Other Greek views of the gods

Epicureans in the Roman Empire

Epicureanism, like Stoicism, lasted throughout the Roman Empire. Lucretius was a famous Roman Epicurean in the time of Julius Caesar who wrote a long book on the subject, On the Nature of Things (De Rerum Natura). There were still some Epicureans as late as the 200s AD, but not really after that.

Epicureans may have had some influence on Christianity. The Christian idea that holy people should separate themselves from the world, not think about their bodies or about the things they own or their friends and family and focus just on Heaven seems to owe something to Epicureanism (and to Buddhism).

But Christians hated Epicureans for denying the existence of heaven and hell, and the immortality of the soul, and for their reliance on pleasure as a good thing. So Epicureanism became less popular partly because of the rise of Christianity, and later medieval philosophers like Petrarch mostly made fun of Epicureanism and rejected it.

Learn by doing: try to want fewer things – does that make you happier?

Bibliography and further reading about Epicureans: