Greek gods and their stories 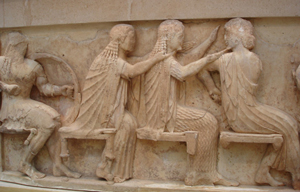 Greek gods on the Siphnian Treasury, Delphi, ca. 530 BC

People in ancient Greece believed in many gods: they were polytheistic (PA-lee-thee-ISS-tick). It is impossible to say how many gods there were in ancient Greece, because different Greek people worshiped different gods, or called their gods by different names. Also, the gods changed somewhat over time. Certainly there were hundreds of gods and goddesses.

The most famous of these gods, and the ones which the most people sacrificed to, were Zeus, Hera, Apollo, Artemis, Poseidon, Aphrodite, Athena, Demeter, Hermes, Ares, and Hades. Many of these ancient gods were metaphorical ways to represent ideas or places or dangers.

Zeus the sky god
Hera and marriage
Apollo and balance
Artemis and girls
Poseidon and the ocean
Aphrodite and love
Athena and manufacturing
Demeter and children
Hermes, the messenger
Ares and war
Hades and death 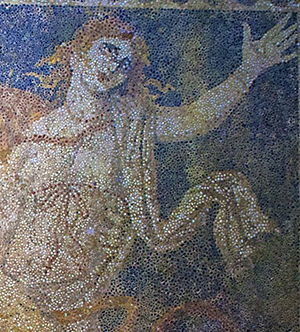 Lots of other Greek gods

But Greek people also worshipped many other gods: Asclepius, the god of medicine, Persephone, Demeter’s daughter, Gaia the earth goddess, Hecate, Herakles, and so forth.

Who was Persephone?
Who is Gaia?
Prometheus the Titan
Herakles the hero

“A world full of gods”

In addition, every little village had its own gods. The local stream, an especially big oak tree, an oddly shaped rock, all were thought to have their own god inside them. You had to worship them or they would get mad. It was, as Keith Hopkins said, “a world full of gods.”

Gods from other countries

Greek people also worshipped foreign gods, if they thought other people’s gods might help them somehow. The Egyptian goddess Isis was especially popular in Athens in the Hellenistic period, for instance. And many Hellenistic Greeks worshipped Astarte, too.

Who was Isis?
West Asian Astarte

To keep their gods happy, most Greek people sacrificed to their gods. Most people in Greece also asked the gods to tell them about the future through oracles.

Bibliography and further reading about the Greek goddesses and gods: