Who was Prometheus? Greek religion 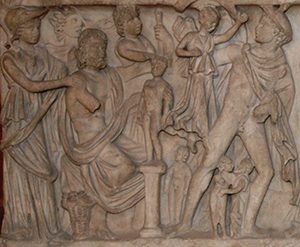 One of the Titans

Prometheus was a Titan, one of the children of Ocean. He and his brother Epimetheus were Zeus‘ and Hera‘s cousins. They were not as powerful as Zeus and Hera and their brothers and sisters, but still had some god-like powers. They were very big, giants (that is why the famous ship was called the Titanic, because it was very big).

He made the first people

In the beginning of the world, the Titans lived on the earth. There were no people yet, just the Titans and the animals. Prometheus used to play with clay, sometimes, and one day he made a lot of little people out of clay. He showed them to his cousins, and Zeus liked the little people so much he breathed life into them. 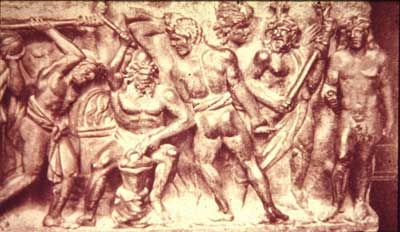 Playing a trick on Zeus

At first the people were very grateful to Zeus and they often gave him sacrifices. But then Prometheus, who loved jokes, told them how they could play a trick on Zeus. Prometheus said, “When you do a sacrifice, take the bones and guts, the parts you can’t eat, and put them in a bag with a nice steak on the top. And in another bag, put all the rest of the steaks, with some bones and guts on top. And ask Zeus to choose which one he wants.”

So the people did this, and Zeus chose the bag with the steak on top (The Greeks used this to explain why they ate the meat from animals they sacrificed to the gods). But when he found he had been tricked, he was very angry. To punish people, he took all the fire away from the earth. The people were very cold, and they could not cook their food. They complained to Prometheus that this was all his fault. 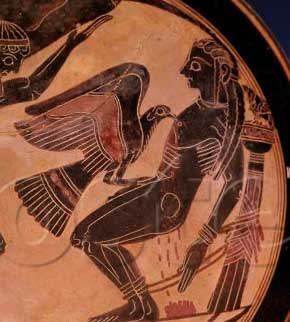 Prometheus felt sorry for the cold people. And he felt it was pretty much his fault for suggesting this trick. So he snuck up to the sky and he broke off a piece of the sun and he brought it back to earth for people, and that is how people got fire.

When Zeus found out what Prometheus had done, he got mad all over again and chained Prometheus to a big rock. (He also punished the people by sending them Pandora). Every day a big eagle would come and eat Prometheus’ liver. But because he was immortal and could not die, every night his liver grew back again, and then the next day the bird ate it again.
Prometheus suffered this torture every day for years and years, until finally Herakles released him.

How is this story like the West African story of Anansi getting stories from heaven?

The story of Pandora

Bibliography and further reading about Prometheus:

Prometheus Bound, by Aeschylus (possibly). Translated by Paul Roche. An ancient Greek play about Prometheus, from the 400s BC.