Garden of Hesperides – Labors of Herakles 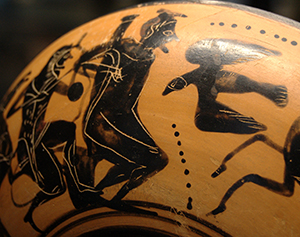 Another labor of Herakles

Herakles was a Greek hero. He killed his wife and children, and as punishment, he had to do a lot of difficult things, the Labors of Herakles.

For this one, Herakles had to go bring back three golden apples from the tree of the Hesperides. The Hesperides were the spirits of the evening. The golden apples were a gift from Gaia, the Earth mother, to her daughter Hera, who hated Herakles. So Herakles was supposed to steal these apples from Hera. (Seems like a funny sort of punishment.)

Who was Gaia?
More about Hera

On his way to the garden, Herakles came across the Titan Prometheus, chained to a rock, so Herakles freed Prometheus. 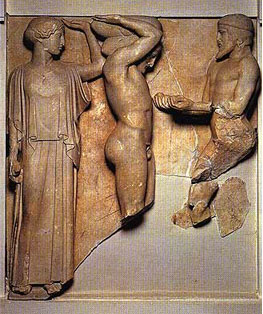 Herakles holds up the world. (Athena is helping him.) Metope from the Temple of Zeus at Olympia, Greece.

Herakles holds up the sky

When Herakles got to the garden, he found the Titan Atlas there, holding the world up on his shoulders – it was very heavy. Herakles offered to hold the world for a while if Atlas would go get the apples. Atlas eagerly agreed.

But when Atlas got back with the apples, he didn’t want to take the weight of the world back again. Herakles finally agreed to keep on holding up the world, but he asked Atlas to just take it back for a minute while Herakles arranged a pad to be more comfortable.

Sure enough, as soon as Atlas had the world back, Herakles grabbed the apples and left, taking the apples back to King Eurystheus to complete the labor.

Learn by doing: act out this story
More Labors of Herakles