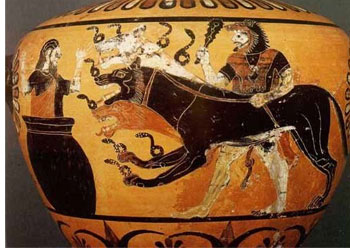 King Eurysthenes hides in a jar, while Hercules threatens him with his dog Cerberus

For the last and toughest of his twelve labors, Herakles had to get the three-headed dog Cerberos from the underworld – the land of the dead.

What is Hades?
Who is Herakles?
More Greek myths
All our Ancient Greece articles

King Eurystheus was sure Herakles wouldn’t be able to do this one. Nobody comes back from the land of the dead.

Herakles in the land of the dead

Herakles found a dark cave and plunged into the underworld. He explained his errand to the god Hades, the god of the underworld. Hades agreed to let him borrow Cerberos for a little while, if Herakles could get him. Herakles wrestled with Cerberos. It was tough, but Herakles was strong. He forced the dog to come with him back to the palace of King Eurystheus.

Herakles comes back from the dead

When Herakles got to the palace, King Eurystheus was very surprised to see him come back from the land of the dead. The king was even more surprised that Herakles had Cerberos with him. Eurystheus was so scared that he hid inside a giant clay pot and wouldn’t come out! (That’s what you see in the picture.)

The end of Herakles’ labors

Eurystheus was so happy when Herakles agreed to take Cerberos back to the underworld that he agreed that Herakles was done with his labors and the curse was finally lifted.

Learn by doing: Draw a comic book of the labors of Herakles
More about Herakles

The Myths of Herakles in Ancient Greece, by Mark W. Padilla (1998). By a specialist.