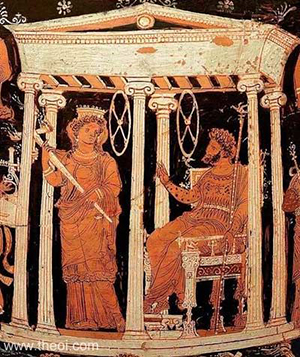 Hades and Persephone in the Greek underworld

What happened when you died?

Greek people didn’t like to talk about what happened to you after you died. So we don’t know as much about what they thought as we might like.

Probably they did not think about life after death as much as later people like the Christians and the Buddhists did, or at least not in the same ways.

Spirits lived on after death

Most Greeks believed that everybody had a spirit. This spirit lived on after your body died. Many Greek people thought of this spirit as being rather like our ghosts. Spirits were sort of transparent and floaty, but looked like the living person otherwise.

They thought that you had to do certain ceremonies when somebody died, in order to let their spirit go to the land of the dead. If you did not do these ceremonies, their spirit would hang around the land of the living. It might haunt you and make a nuisance of itself. The most important thing was that dead people had to be buried. (see the story of Antigone, for instance).

Who was Antigone?
The Trojan Women
The story of Ajax 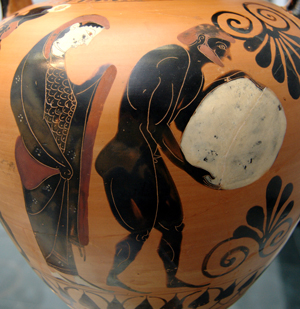 Persephone supervises the punishment of Sisyphos

How did you get to Hades?

After your relatives buried your body, so you were under the ground, you could cross an underground river, the river Styx (pronounced STICKS), to get to the land of the dead. Often dead people were buried with a small coin or two to pay the ferryman, Charon (KA-ron) who took you across the river Styx.

Then when you got to the land of the dead, it was basically like any place underground: dark, damp, and chilly, with nothing much to do. There would be lots of ghost-spirits floating around, bored and depressed, sounding like thousands of bats. You just stayed there forever. There was no promise of a better place for good people, or a worse place for bad people.

Who was Achilles?
What did Tantalus do?

(Though there were exceptions for some special people like Achilles, who went to a nice sunny underground meadow called the Elysian Fiels. And some extra bad people like Tantalus and Sisyphus, who had the hubris to think he could trick Zeus, got punishments.) Hades was king there, and sometimes Persephone was the queen.

Who was Persephone?
Hades, king of the dead 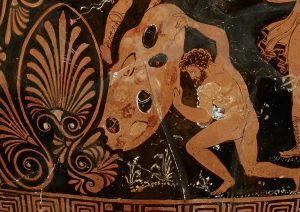 Sisyphus pushes his rock (in a different view)

When Odysseus visited the land of the dead and saw the spirit of Achilles there, he asked him what it was like, being dead. Achilles answered sadly that he would rather be a landless field hand, and alive, than be the king of the dead.

What other ancient people thought

This description is about the same as what other ancient people thought around the same time. The Zoroastrians and the Jews had similar ideas. Gradually people got more interested in the afterlife. By the time of Jesus everyone – not just Christians – was beginning to think about a different afterlife for good and bad people.

Learn by doing: draw a picture of the Greek underworld
More about Hades

Bibliography and further reading about Hades and the underworld:

Aspects of Death in Early Greek Art and Poetry, by Emily Vermeule (1979). She’s an expert on early Greece, and this book goes into detail about what the Greeks thought happened to people after they died. For serious readers.