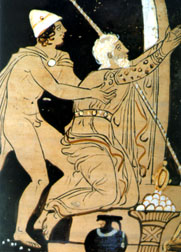 Tantalus’ crime and punishment: This Italian vase from the 300s BC shows a different version of the story where a spirit holds Tantalus back from a basket of bread and a jug of water

Who was Tantalus in Greek myth?

Tantalus (TAN-ta-luss) was a Greek king (and a son of Zeus) who was so full of hubris that he thought he could fool the gods.

When Zeus invited Tantalus to come up on Mount Olympos and eat dinner with the gods, Tantalus plotted to steal the gods’ special food (ambrosia and nectar) and give it to his friends back on earth!

What was Tantalus’ crime?

And then Tantalus did something worse than that. He invited the gods over for dinner at HIS house, and tried to trick them into eating human flesh. Tantalus had his own son, Pelops, cut up into pieces and boiled in the stew.

Most of the gods figured out what was happening and didn’t eat any, but Demeter was so worried about Persephone, who had been kidnapped, that she ate a little piece of Pelops’ shoulder. This is a terrible way to treat your guests.

(More about xenia – how to treat your guests)

What was Tantalus’ punishment? 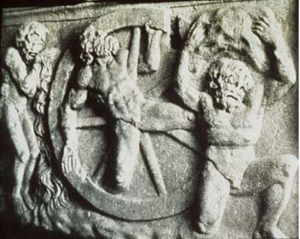 This Roman sarcophagus shows Tantalus on the left, scooping up water in his hand – but it always falls through his fingers before he can drink it! The other two criminals being punished are Ixion and Sisyphus. All three treated guests badly.

For this crime, Zeus himself killed Tantalus, and Tantalus had to spend his whole afterlife in the underworld, Hades. His torture was that he had to stand forever waist-deep in a pool of water, with a fruit tree dangling branches full of ripe fruit over his head.

He got terribly hungry and thirsty, but whenever he bent down to drink the water, it would all magically drain away, and whenever he reached up to pick some fruit, the branches would lift up out of his reach.

But no matter how hungry or thirsty he got, he was already dead, so he could never die. (That’s where our word “tantalizing” comes from.)

Tantalus and the afterlife

This story, where Tantalus is punished after his death for being a bad person, appears in Homer’s Odyssey, which was written about 700 BC. Egyptians had always believed that bad things happened to bad people after they died, but this idea may have been new in Greece at this time.

The curse on Tantalus’ descendants

Because of Tantalus’ hubris – thinking he was smarter than the gods – Tantalus’ children, Pelops and Niobe, and his grandchildren, Atreus and Thyestes, and his great-grandchildren, Agamemnon and Menelaus and Aegisthus, and their children Orestes, Electra, and Iphigeneia were all unlucky.

Bibliography and further reading about Tantalus:

The Odyssey, by Homer. Translated by Robert Fagles. The story of Tantalus is in Book 11.

The Oresteia, by Aeschylus, translated by Robert Fagles (Penguin Classics). The story of Tantalus’ great-grandson Agamemnon. Fagles is a great translator! Includes a version for performance.

More about Pelops (who comes back to life!)
Ancient Greece
Quatr.us home