Atreus and Thyestes – House of Atreus – The Curse

Who were Atreus and Thyestes?

Atreus and Thyestes were brothers, the sons of Pelops and Hippodameia. The brothers grew up together and played together.

Greek mythology made easy
All our Ancient Greece articles

But instead of loving each other, Atreus and Thyestes were always rivals in everything. This may have been partly because of the curses on Tantalus, their grandfather, and Pelops, their father. 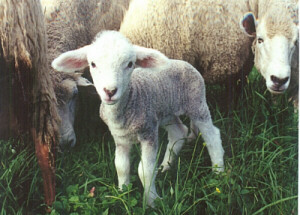 A lamb standing in a field

One day, Atreus promised to sacrifice the best lamb in his flock to the goddess Artemis.

History of sheep
What is a sacrifice?
Who is Artemis?

Later that afternoon, as he went walking among his sheep, Atreus found a lamb with a golden fleece! Certainly he should have sacrificed that one to Artemis, but he didn’t want to sacrifice such a beautiful thing, so he killed the lamb and kept the golden lambskin in a box instead.

Atreus and Thyestes make a deal

But Atreus’ wife, the Queen, was secretly in love with Thyestes. She agreed to steal the golden lambskin and give it to Thyestes. Then Thyestes dared Atreus to make a deal with him. He said, “Let’s say whoever has the golden sheepskin can be King of Mycenae.”

Well Atreus knew that he had it in his box, so he agreed. But then it turned out that Thyestes had it, so he got to be King. Atreus was very angry.

Atreus and Thyestes make a bet

Atreus went to Zeus (his great-grandfather through Tantalus) and complained. Zeus told Atreus to make a bet with Thyestes that if the sun ran backward, Atreus could be king again. 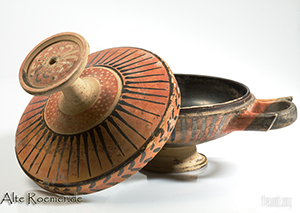 Pottery lekanis with a lid

But Atreus couldn’t let it go at that. He was still very angry at his wife and Thyestes. So he pretended to be friendly and invited Thyestes to come over for dinner, with his two little boys. Thyestes was happy that he was going to be reunited with his brother!

When Thyestes arrived, Atreus sent the boys out to play and sat down for a good talk with Thyestes. Soon the slaves brought dinner in, and they ate course after course of delicious food. Then another slave brought in the dessert in a big covered dish.

But when the slave took the cover off the dish, Thyestes was horrified to see his two sons’ bloody heads and hands and feet! Atreus had murdered them and cooked them and served them to him for dinner. Thyestes just ran out of the palace and never came back again. He did, however, have one more son, Aegisthus, who eventually avenged his dead brothers.

Learn by doing: check out a lambskin in a store or on a lamb
More about Atreus’ son Agamemnon

Bibliography and further reading about Atreus and Thyestes:

The Oresteia, by Aeschylus, translated by Robert Fagles (Penguin Classics). The story of Atreus’ son Agamemnon and grandson Orestes. Fagles is a great translator! Includes a version for performance.