What is animal sacrifice? History of religion

In English, when we say “sacrifice”, we mean that you have given up something you wanted in order to get something else, like you sacrificed your best piece of candy in order to get your friend to tell you his secret. In Greek, sacrifice was a much more specific thing: it means killing a tame animal and offering part of it to the gods, or to one specific god, while eating the rest of it yourself.

The Greeks probably began to sacrifice animals to their gods not long after they first began to keep tame animals. It was one thing to hunt and kill wild animals like deer, or fish, but it bothered people to kill animals they had taken care of, that trusted them. (And it still bothers many people today.) 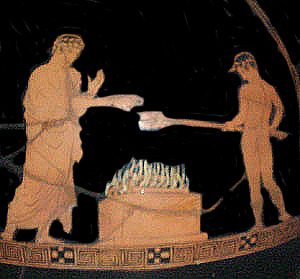 Animal sacrificie: Athenian red-figure vase, 430-425 BC (now in the Louvre)

So people began to kill tame (domestic) animals only when they thought a god wanted them to do it. And only all in a group, all together, sharing the guilt.

Generally an animal sacrifice went something like this: somebody decided that he or she owed something to a god, or that he or she wanted something from a god. Or there were also regular times of year for sacrifices. It’s a lot like prayer: people today pray at certain times of year, and maybe every Sunday morning or Saturday morning or Friday evening, but also when someone is sick or before an exam, or after someone gets better. 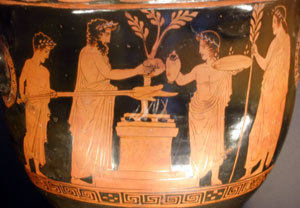 Once you had decided to sacrifice, you called together a suitable group of people to participate. Many sacrifices were family matters, like if someone was sick, and perhaps one or two chickens might be sacrificed with the family standing around, and then the family would eat the chickens for dinner. There was a stone altar outside each house that you could kill the chickens on, with an appropriate ceremony. Then you offered the fat and bones up to the god, while you roasted the meat over a fire.

(Yes, it bothered the Greeks that they ate the good part and gave the god the yucky part. The myth of Prometheus tries to explain why this is).

Animal sacrifice shows who is in and who is out

Other sacrifices were larger: a goat, a sheep, or a pig, or even sometimes a cow. To sacrifice a goat, you’d have to get together more than just your own kids: that was for a wedding or a funeral. All the meat had to be eaten at once (partly for religious reasons and partly because there was no refrigeration!). Often sacrifices involved more than one animal, and the whole village or the whole town came to participate in it. This helped to bring people together, by showing you who was part of your group (we have potluck school dinners and end-of-season sports banquets and so on in the same way).

The beginning of the end

People sacrificed animals enthusiastically from the Stone Age until around 500 BC, when with the rise of the first empires, all across Asia and Europe animal sacrifice slowly began to seem old-fashioned and kind of weird.

Learn by doing: roast meat (or apples) over an open fire
The end of sacrifice
More about Greek religion

Homo Necans: The Anthropology of Ancient Greek Sacrificial Ritual and Myth, by Walter Burkert (1987). (Homo Necans means Man the Killer). Burkert is one of the great experts in Greek religion.