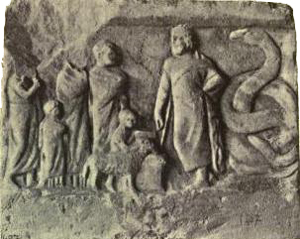 Getting sick in ancient Greece 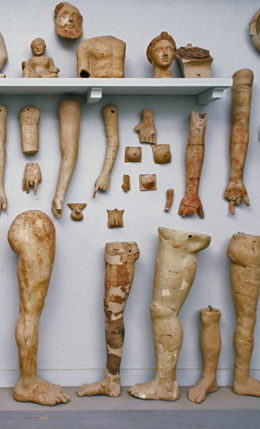 Hints to Asclepius about which part needs fixing

At first, Greek doctors, like the Egyptians and Indians, believed that demons caused diseases, and that gods like the god of medicine, Apollo‘s son Asclepius, could cure diseases. Greek healers tried to cure patients using sacrifice and prayer. People often bought models of the part of their body that was sick to leave at Asclepius’ shrine. That was how they let the god know what to fix.

At the same time, though, Greek doctors did use medicines that worked. They used wine, opium, and henbane to help with pain and toothache, and they used aloe (originally from Egypt) to cure burns. They used crushed garlic to disinfect cuts, and mint tea to help with stomach aches.

Who invented wine?
Where did opium come from?

But by around 500 BC, Greek doctors became more interested in using scientific observation and logic to figure out what caused diseases and what you could do about them. Slowly Greek doctors worked out a logical system for understanding disease.

The main collection of writings about Greek medicine is the Hippocratic Writings. They’re named after the first and most famous of these doctors, Hippocrates (hih-POH-krat-ees).

We don’t know for sure if Hippocrates really existed – his writings might be just a collection of a lot of doctors’ writings – but later Greeks thought he was a real person.

Greek medicine: a Greek doctor letting blood out of a patient because he believes in the four humors

This logical system began with the idea that doctors should first of all be careful not to actually harm their patients. Hippocrates sensibly recommended starting treatment with good diet and exercise. That wouldn’t hurt anybody.

If the patient didn’t get better, then the doctor should try medicines. Surgery should only be used as a last resort.

Hippocrates went on to the idea of humors, which was popular all over Europe and Asia at this time, in India and China as well as Greece.

The idea of humors may even have gotten started in Greece, where it makes its earliest appearance. Greek doctors like Hippocrates believed that people were made out of four substances: blood, black bile, yellow bile, and phlegm (pronounced FLEM) (means boogers). 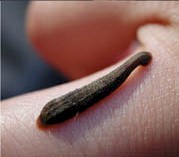 How to balance your humors

If you were healthy, that was because your four humors were balanced. You had the right amount of each one. But if you had too much of one humor, you would be unbalanced and you would feel ill.

For instance, if you looked pale, that meant you had too little blood and you should eat liver, which has a lot of blood in it. This would totally work, because people are often pale from anemia, a shortage of iron, and liver does have a lot of iron in it.

Why do people need iron?
What does your liver do?

On the other hand, Greek doctors also thought that if you had too much blood, that would give you a fever. So your medical treatment should be to reduce the amount of blood in your body. Greek doctors did this by cutting your arm until blood ran out. This was supposed to help bring down your fever. Or they put leeches on your arm to suck the extra blood out.

These ideas are mostly wrong (as the Islamic doctor Al Razi pointed out about 900 AD), but the idea that you could learn to understand and treat diseases by using careful observation and logical thought is very important to modern medicine.

Learn by doing: compare to Chinese medicine
Or compare it to Indian medicine
More about Roman medicine

Greek and Roman Science, by Don Nardo (1998). Nardo has written a lot of good easy to read books about the ancient world; this one is no exception.

Hippocratic Writings, by Hippocrates and others. Translated by G.E.R. Lloyd. What the Greeks themselves had to say about medical theory and practice.

Hippocrates, by Jacques Jouanna and M. B. Devevoise (1999). A commentary on the Hippocratic writings and Greek medicine in general, for adults.