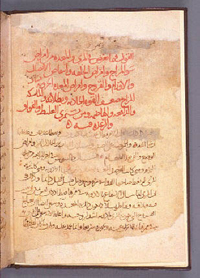 Where was al Razi from?

Al Razi was born in Iran, in the Samanid kingdom, in 865 AD. That was when Iran was part of the Abbasid Empire. The Samanids were traders. They had plenty of money. They liked to spend money on education and the arts. So many scientists and artists lived in their kingdom.

Al Razi seems to have started out as a musician, maybe playing the lute. But then he decided to study chemistry. He studied chemistry to try to find a way to turn copper or lead into gold. He didn’t manage to turn copper into gold (which is impossible). But he did make other chemical discoveries along the way. He invented methods of distillation and extraction to purify chemicals.

When Al Razi was middle-aged, maybe about 35 or 40 years old, he started to have problems with his eyes. Maybe his chemistry experiments had given him cataracts or damaged his eyes in some other way. He began to learn medicine in order to try to figure out what was wrong with his eyes. Al Razi studied medicine under al Tabari, a well known doctor in the area.

Who was al Tabari?
How do eyes work?

Al Razi never did figure out what was wrong with his eyes. But he became a very good doctor. As a medical researcher, Al Razi was the first to say that smallpox and measles were two different things, though he thought they might be different stages or aspects of the same disease.

What was smallpox?
All about measles

Al Razi was also the first doctor to reject Greek and Indian ideas about humors and recognize that fever is not an illness in itself, but a way for your body to fight off an illness. He warned people not to expect cures for all diseases, and not to buy dangerous medicines from fake doctors who promised miracles. He was also very skeptical about religion and religious cures.

Other work by al Razi

Like his teacher, al Tabari, al Razi was very much interested in children’s medicine. Al Razi was the first doctor to write a special medical book about children’s diseases. He used opium as an anaesthetic during surgery, having his patients inhale opium fumes from a wet sponge held over their mouth and nose.

He operated on people for hernias, kidney stones, and varices (swellings) in their leg veins. Like Galen, al Razi used catgut – sheep intestines – to sew his patients up after surgery.

After Al Razi’s death, a Jewish doctor translated his writings on medicine into Latin, so that European doctors could read them. Al Razi became famous even as far away as Europe, where people called him “Rhazes”.

Bibliography and further reading about Al-Razi: