History of Music and Musical Instruments 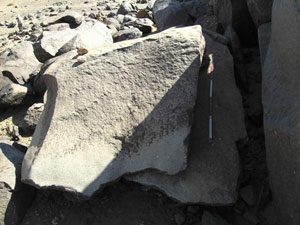 A rock gong in Africa from the Stone Age

Birds probably made music long before people, perhaps soon after they evolved in the late Jurassic period, about 150 million years ago. Early people would have been familiar with birdsongs, probably listening to them, as other animals do, to find out where there were dangerous animals. Possibly early people learned to whistle birdsongs, or to sing them, as a way of signalling each other, or as a way to hunt birds.

History of birds
The Jurassic period

When did people start to make music?

People have been making music almost as long as there have been people, probably for at least a hundred thousand years. The earliest music, in Africa, was probably clapping hands and singing. Soon people also began to bang on hollow logs and knock sticks together to make louder sounds; these were the earliest percussion instruments.

When were wind instruments invented?

By about 3100 BC (if not earlier), musicians in West Asia and Egypt were making instruments that could produce different pitches: high and low notes. The first wind instruments may have come from Egypt, even before the beginning of the Old Kingdom.

These were hollow reed pipes with holes in them to put your fingers on to vary the pitch. Some probably had reeds in one end that you put in your mouth, like a modern clarinet. Musicians sometimes played one pipe, and sometimes played two pipes at the same time, one with the fingers of each hand. By about 1800 BC, in the Shang Dynasty (if not earlier), people were also playing pipes in China.

The earliest stringed instruments may have come from West Asia, where the Sumerians built thin lyres as early as 3000 BC. By 2500 BC people in northern Syria were also playing lyres, and by about 1900 BC, in the Middle Kingdom, Egyptian musicians had also learned to play the lyre, though lyres did not become common in Egypt until the New Kingdom. By 200 BC, people were playing stringed instruments like the qin in China, too. The earliest lutes – a lyre with a neck like a modern mandolin – were also from West Asia.

We don’t know what this early music sounded like, because there was no way to write down notes or to record music. We can tell from pictures and from descriptions that people sometimes played their instruments alone and sometimes in groups, and that they probably played songs with verses and choruses as we do today.

Playing a shofar (a ram’s horn) in Jerusalem

By about 1500 BC, in the New Kingdom, people in Egypt were playing bronze trumpets as well as flutes. (But it’s possible that trumpets existed as early as the Old Kingdom). At first musicians seem to have mostly played trumpets for the army. They were also blowing through cow and goat horns to make music.

Around 300 BC, Greek musicians worked out ways of writing down notes to describe songs. Soon afterward, thanks to the Greek conquest of Egypt, Egyptian musicians also used the Greek method to write down songs. In the Middle Ages, about 1000 AD, Christian monks in Europe began to use a new method of writing down notes, the ancestor of the system we use today.

Around the same time, in the 900s AD, Central Asian musicians made the the first bowed instruments, like today’s violins. They started with hunting bows, which were common in Central Asia, and they used horsehair for their bows because they owned a lot of horses.

Bibliography and further reading about the history of music: