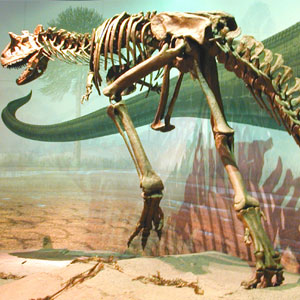 A dinosaur skeleton from the Jurassic period

How the Jurassic period began

When the Jurassic period began, about 199 million years ago, a lot of animals had just become extinct in the catastrophe that ended the Triassic period. This left room for the dinosaurs to have a lot of baby dinosaurs. Soon all different kinds of dinosaurs were living all over the Earth. The Jurassic is the main period of the dinosaurs – that’s why they called the movie “Jurassic Park”.

The super-continent breaks up

At the same time, near the beginning of the Jurassic period, the supercontinent Pangaea broke up into smaller continents. These continents started to drift away from each other. Some tectonic plates crashed into each other and formed, for example, the Andes mountains in South America. So some of the dinosaurs and early mammals were isolated from the others. Different kinds of animals evolved on each smaller continent.

What was Pangaea?
The Andes Mountains

The climate gets wetter

But as Pangaea broke up, the dry heat of the Triassic became a more rain forest kind of climate. The climate stayed warm, as in the Triassic period. There don’t seem to have been any ice ages, or any ice at the North or South Poles. In warmer areas, the plants were mostly ferns. And there were plenty of mushrooms. In colder areas there were a lot of pine trees and ginkgo trees.

What’s a ginkgo tree?
More about pine trees
And about ferns
How did mushrooms evolve?

Later in the Jurassic, about 150 million years ago, the first birds evolved from small flying dinosaurs (but not from pterodactyls). Like the pterodactyls, the birds were warm-blooded.

How did the Jurassic end?

There was no catastrophe this time, but the Jurassic period gradually changed into the Cretaceous period about 145 million years ago.

Learn by doing: go see a dinosaur skeleton in a museum
More about the Cretaceous Era

Bibliography and further reading about the Jurassic period and geology: